Is El-P a paranoid fantasist? or is he just preternaturally tapping into society’s malaise? At first glance the question answers itself – how else do you explain the promo shots in which he’s hooked up to a polygraph? or the besieged mentality that permeates his record?

But what about “Drones over Bklyn,” in which a vision of drones floating around the city, spying, appeared to El-P in a fever dream, and that a few months after the song was completed evidence emerged that local law enforcement was in fact using remote surveillance drones?

Truth be told, El-P is a 21st Century soothsayer, who isn’t as much foretelling the future as having the future unfold in a way that matches his worldview. This is how El-P sees himself too, ‘Just a Cassandra too drained to painfully word it further’ – from the first single, “The Full Retard.” Of course, his take on it is a little more besieged than mine. Case in point, the opening lines to “True Story,” a song El-P describes as “a quick palm read on how I see shit going down right now; another peek behind the curtain”:

Of all the rappers that started out on Def Jux roster, El-P was always the boy least likely to... his braggadocio and resentment of anyone that he perceived to be against him – so basically, everyone – was never as stimulating as Aes’ pop culture verbiage or Lif’s politics. Somewhere along the line, however, probably around the time he started penning “Stepfather Factory,” El-P became the most thought-provoking lyricist amongst them. It’s no coincidence that his last couple of records have included a lyric sheet.

There is a trio of songs towards the second half of C4C that are amongst the best that El-P has written, not for being bangers (though there are plenty of those) but for lyrical content. The first of these is “The Jig is Up,” in which El-P, in a relationship of which he feels unworthy, proceeds to interrogate his partner having concluded that the only reason she could possibly be with him is if he’s being set up in some sort of Total Recall fake-wife scenario.
The second song, “Sign Here,” is about power and control in sex, or more importantly the relinquishing of power and control in sex – basically, Foucault for backpackers. The song takes the form of an(other) interrogation, where, quite brilliantly, the “safety word is ‘yes’.”
And in the last song, “For My Upstairs Neighbor (Mums the Word),” El-P assures his upstairs neighbour that if she kills her abusive partner, he won’t say a word to the cops.

These aren’t words and concepts normally associated with hip hop records, but El-P hasn’t released a normal hip hop record since his Company Flow days and even then no one was making music like what was found on Funcrusher Plus. And so, with Cancer4Cure, El-P has found yet another way to grind against his listeners musically and lyrically. Don’t make the mistake the Greeks did of not listening. 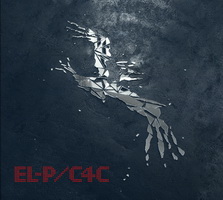