We can speculate, to be sure, of what happened in the five years between Aesop Rock’s last record and this one, and how much of what did happen made its way into Skelethon, and it had been a tough five years: good friend and collaborator, Camu Tao, died, El-P pulled Def Jux into hiatus and Aes’ marriage fell apart.

Speculation, however, will only take you so far, and we’re left to sort through the muck with the only things that stand on their own – the songs. Unfortunately, this becomes a problem for any Aesop Rock record. His art is in his words and whilst Aes has always been a dense rapper, his rhymes on Skelethon are genuinely mind-boggling. The lyric sheet alone, black on grey in tiny font, is a daunting read in and of itself.

The first single, “Zero Dark Thirty,” a military term for thirty minutes after midnight, signals the return. Maybe the stealth was warranted. After all, five years is a long time in the rap game, and things truly have changed since None Shall Pass – one can only imagine that it is the Odd Future crew who have become the “Roving packs of elusive young/...Choke-lore writers over boosted drums” and that it’s Aes who is “Down from a huntable surplus to one.”

The obvious preoccupation, however, is death. Sometimes it’s in the small references, the “Here is how a great escape goes when you can’t take your dead friends’ name out your phone,” from the third single, “Cycles to Gehenna” – Gehenna being the destination of the wicked in Abrahamic tradition; that is to say, hell. Or in the “If you’re just tuning in, walk into the light,” from “Fryerstarter.”

Sometimes, however, the references are more exhaustive: “Ruby ’81,” a song of one verse with an atonal backdrop that progressively intensifies, details the story of a two year old child that falls into a pool and is saved from drowning by the pet dog. “Crows 1,” one of two songs to feature Kimya Dawson, carries the line “Everything you’re hiding shows/in the way you view the graves like a string of tiny thrones,” and where Aes’ rhymes are a tad opaque, Kimya seems a little clearer in intent:

I'm not gonna stand atop your plot
I love you friend, but I'm just not
On the other hand if your ashes are scattered in the sea
I will swim in the sea and you'll be with me
And if your shit is scattered at the roots of a tree
I will climb that tree

Not everything in Skelethon is quite so grim: “Racing Stripes,” with Kimya in fine carny mode, charts the progress of a cat called Camu who in changing his haircut, becomes another person and changes his life, and “Homemade Mummy” is exactly that, instructions on how to make a homemade mummy.

The songs are mostly reminiscent of None Shall Pass, musically speaking, but perhaps because Aesop Rock put everything together himself, everything seems more thematically and musically consistent. Furthermore, perhaps because he had more time to make this record or perhaps because we’ve been waiting five long years, everything about Skelethon seems brighter and smarter than the last record. Even the packaging, a four-part gatefold with impressive art, has been lovingly put together.

Guests are thin on the ground, especially when compared to None Shall Pass where there were a couple of guest raps and just about half the album was produced by Blockhead. This time around everything was put together by Aes, and he’s the only one dropping rhymes: Rob Sonic shows up a couple of times but it’s only for hooks and backing vocals, never a verse; Kimya Dawson, future The Uncluded collaborator provides a chorus on one song and backing vocals for another; and some instrumentation is provided by his ex, Allyson Baker, and LA musicians, Hanni El Khatib and Nicky Fleming-Yaryan.

A final word, though: the tone of the record is best captured in the last song, “Gopher Guts,” a song that stutters along whilst confessing to a series of betrayals and abandonments: “Today I pulled three baby snakes out of moss and dirt where the wild strawberry vines toss and turn/I told them you will grow to be something inventive and electric; you are healthy, you are special, you are present then I let them go.../Oh...” This is repeated twice more with three green frogs and three ghost crabs, respectively, but it is the pause between the “Then I let them go” and the “Oh...” that makes this such a powerful expression of regret, and it is the final verse,

that offers proof that Skelethon is Aesop Rock’s best record to date and that he has nothing to fear from these new “elusive young.” 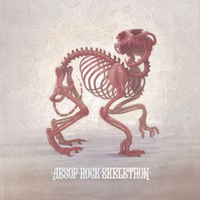