Aesop Rock - None Shall Pass

None Shall Pass is conceptual, I'm sure of it, though the concept I've yet to penetrate. And in the crafting of this alleged concept, Aesop Rock has twisted together a claustrophobic, dark collection of songs whose sounds waver between three points demarcated, somewhat roughly, by Labor Days, the nicer parts of Bazooka Tooth and Fast Cars, Danger, Fire and Knives.

Cage, Rob Sonic, Breezly Brewin' and El-P each drop a verse, and all, as might be expected, do exceptionally fine work, though they never come close to shining, rhyme-wise, as brightly as Aesop does. John Darnielle, of The Mountain Goats, also guests on the final final track of the album — the one that appears after the silence that follows the actual final track — a nice folksy little song about pigs — pigs perhaps metaphorical, perhaps just literal.

Aesop and Blockhead handle the bulk of the production — the latter having contributed seven songs to the album, the former, five. On top of this, El-P and Rob Sonic each provide one song. The production is consistently creative, and though I will again direct those looking for a clue as to what None Shall Pass most closely resembles to that previously mentioned nexus of sounds, it really is an absurdly imaginative and well-written record.

Aes' rhymes are spectacular throughout, as dense as always and still managing to stitch together threads of pop culture into elaborate, complex conceits. This, when combined with the excellent production and some catchy, catchy hooks, makes for an unmitigated success of an album, and one that's well worth whatever poetry you've been asked to spend on it. 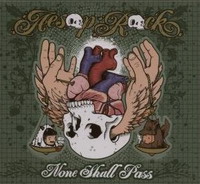