I’m not going to lie to you. Between the last Squarepusher record I purchased, Hello Everything, and this one, Tom Jenkinson released three other Squarepusher records. Each of those records was odd in such a way as to make me wary enough to not buy them. The first, Just a Souvenir, was an attempt to provide a soundtrack to a fucked up dream he'd had. The next two were called Solo Electric Bass, Vol. 1 and Shobaleader One: d'Demonstrator, so I have no idea what was going on there.

Ufabulum, on the other hand, seemed like the first… regular? normal? record since Hello Everything, and that’s basically why I returned to the fold. I digress; I mention those six lost years for the sake of some much needed context. Though I missed the boat there for a few years, it is evident that Jenkinson was trying to achieve something with those records, and that something seems to be the gradual shift from musician to performance artist.

Just a Souvenir, for example, attempted to catalogue, musically, parts of a dream where, I’m told, rivers appeared on stage and band-members had to retreat to kayaks in order to keep performing – hardly a traditional source of inspiration for drum & bass. Shobaleader One: d'Demonstrator, on the other hand, featured R&B-tinged electro-rock performed by a hooded band.

As you can see from the cover of Ufabulum, Jenkinson has not abandoned the performance art aspect of his music, and indeed the CD booklet has photographs of Jenkinson performing wearing that weird space helmet and surrounded by oceans of LEDs. If anything, I sincerely hope he brings that show to Sydney because it looks as if it’ll be a fucking cracker.

So, Ufabulum... For the most part it is a successful album. More than that, it’s an excellent one. Jenkinson has mastered melody, and though it’s counterintuitive to think it, at the end of the day a Squarepusher album is ostensibly a pop record, balancing the extremes of the drums against the prettiness of the melodies. After all, even when Ultravisitor was at its most monomaniacal, it managed to stick to the mouth like peanut-butter on the brain. Ufabulum is no different.

The record is largely devoid of bass guitar or at least bass guitar that still sounds like bass guitar. Synthesizers do the bulk of the work, and they can sound shrill as on “Unreal Square,” creating a tension that can only be broken by a spastic drum beat or they can sound like a motorbike as on “Dark Steering,” the record’s best song. And, fortunately, Jenkinson’s head for melody is more than adequately matched by his knack for programming.

No, where Ufabulum falls flat, is in stoking expectations that it can’t possibly satisfy. Ufabulum has been built up to be a massive event, but what made records like Ultravisitor and Music is Rotted One Note so astounding is that they seemed to come from almost nowhere, they just appeared in the store not sounding how a drum & bass record should. That, however, isn’t a question of songs or of sounds or of drums and melodies but rather of prejudices, and that’s mostly on us. 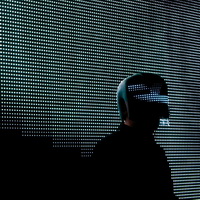