Those Darlins - Screws Get Loose

Those Darlins are a country-rock band that have, as evidenced by the cover art wherein someone has jammed their finger up Jessi Darlin’s nose, punked up their sound and now sound like a country-punk band. They are, however, an interesting band regardless of whatever nasal intrigues might be taking place in that they seem to operate more as a collective than as a band. The songs are never written by more than two members – quite often just the one – and it isn’t necessarily true that everyone in the band played on every track.

You would imagine that such a record would sound disjointed, and in some ways it does, but the trick is that it somehow works perfectly. The record starts with what might be the best one-two punch that I’ve heard in a long time: “Screws Get Loose” is a gorgeous pop song with a gorgeous chorus, all snotty vocals and lyrics about losing one’s mind. This is followed by “Be Your Bro,” a stomping rocker that is also an attempt at dousing a case of unrequited love:

These first two songs were written and sung by Jessi and she is easily the star of the show. The way she sings the word “man” is sexy precisely because it is so snotty. And when she isn’t sounding snotty she sounds trippy as she does on the psychedelic “Mystic Mind” or bittersweet as on “Waste Away,” the penultimate song, an acoustic ballad that is easily the prettiest song on the record.

Of course, it goes without saying that the other members all come correct in their own appreciable way: the third song, “Let U Down,” written and mostly recorded by the only bloke in the band, Linwood Regensburg – and how fuckin’ rock n’ roll is that name? – is a swinging country number; Kelley Darlin shines on “Boy,” a sassy honky-tonk; and Nikki Darlin provides the most guileless moment on the record, “Hives,” a quick-clipped reflection on that most common of human condition experiences, having a crush.

It was necessarily true that Screws Get Loose – the album, that is – was never going to live up to the expectations created by the first two singles, the title track and “Be Your Bro.” Given that the record ends or codas, to mutilate a class of words, with the instrumental outro of the title track, it’s probably correct to assume that Those Darlins were aware of what a monster of a song they had in “Screws Get Loose.” And they were right to be aware, the song is as catchy as all hell, but Screws Get Loose – again, the album – however, comes terribly close to matching those first three and a half giddy minutes. 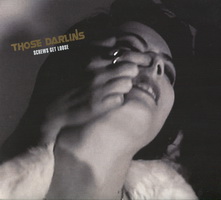