It’s been seven long years since Bigg Jus released a record – the excellent Poor People’s Day – but an even longer nine years since he has referred to himself as Kingspitter. This is telling, the resurrection of the persona that tore shit apart on Black Mamba Serums but was curbed for the musicality and consistency of theme of Poor People’s Day.

Machines That Make Civilization Fun takes its cues from Nephlim Modulation Systems, though this time around everything was written and produced by Jus, and there are no guest spots on the record.

The drums and bass often pound, punctuated by stabs of synth and supported by a bed of tinny hi-hats. Over this, Jus spits rhymes that last as long as the songs they’re in, and hooks, if they exist, are an afterthought. First single, “Advanced Lightbody Activation” and the terminally funky, “Black Roses,” are the best examples of this.

For a record with such a full and dense lyric sheet it feels as if Machines That Make Civilization Fun is light on words, but of the thirteen songs on the album only three don’t feature any lyrics and these include the intro and the outro. This is because where Bigg Jus’ lyrics always seemed to employ stream-of-consciousness, this time around this tendency has bled into the music a lot more.

The title track, to offer another example, offers blurry, drunken vocals that cover a host of political and social matters but also mix in nonsense words in a throbbing soup of a song. This is followed by, “Polymathmatics (Restore Balance out Think a Savage Trick)” where Jus goes into full mythical mode: “Rasta's mastaba/On the left of the sacu/Ashra's mantra/Afu Ba Ka Amen Ra/Ursa Maat-Ra Setep En Ra/Ramesu with the Metu Meri Amen/Salute to Ashra Kwesi to Dr. Ben/The Tjati physician at Sakkara/Waset tekkens be the monuments/Djoser antenna dead center of Washington/Antimorph yourself from Asar's grip that's palimpsest/Millennium before any thought of Solomon temp Hiram Abiff...”

Of course, Bigg Jus can still be explicit: when the pace finally slows down – this happens by the fifth track, mind – Jus references the Chicago School of Economics, US historian and Iraq war advocate, Bernard Lewis and co-opted humanitarian aid organised by MI5 and MI6, and ends the track with an accusing “Time for some soul searching/First you fucking need a soul."

This is visceral, cerebral music, and when Bigg Jus calls on us to “Occupy all dem,” it’s almost enough to shake us up a little. 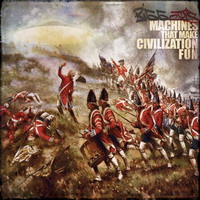