The ubiquitous intro done & over and we're in.

From the outset you can tell that Poor People's Day shares little of what made Black Mamba Serums 2.0 such a great record.
On hearing the strings and bassline of "Supa Nigga" you immediately realise that this is actually a well-produced and focused record; missing are the abrupt mid-song changes, and, this time, Bigg Jus actually sticks to the beat avoiding his usual in, out and around meandering.
Furthermore, unlike the numerous guests that graced Black Mamba Serums 2.0, there are only two over the course of this record: Patricia Reed, who provides a nice, soulful coda for "This is Poor People's Day" and Marq Spekt, who, as is wont, tears shit up on "Orbital Mechanics."

Surprisingly, fortunately, these differences, far from being critical, actually work to the strength of Poor People's Day. The music, some of the best to be found on a hip hop record, is propped up by some incredible beats and some very creative production.
Bigg Jus, for his part, shows that he can easily carry a record on his own — something that I'd suspected since first hearing him on Funcrusher Plus. His lyrics are, of course, as pointed as ever — war, poverty, hegemony, etc, are, as usual, the targets of his ire. This time, however, Bigg Jus' lyrics are more creative, his metaphors more colourful, than ever.

In short, whilst Poor People's Day is Bigg Jus' most accessible work it is also undoubtedly some of his best, and, therefore, almost by definition, some of the best hip hop being released today.
"Hip-hop at it's most classic, roughest, and freest." 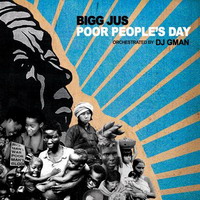 If, however, you're more interested in that fucked up shit that Bigg Jus does so well I suggest you pick up Nephlim Modulation System's Woe to Thee O Land Whose King is a Child. 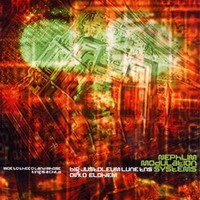 Released in 2003, this was put together by Orko Elohiem and Big Justoleum

He shares nothing, this Christ.
Sterile. Impotent. Fucklove prophet of death.