El-P - I'll Sleep When You're Dead

It's been a few years since El-P unleashed his last monstrosity, Fantastic Damage, onto the world. It's nice to see that, in what is relatively quite a long time, none of El-P's misanthropy has been compromised. Make no mistake, I'll Sleep When You're Dead is a jarring, irate record. Aided by a misfit collection of guests: Aesop Rock, Cage, Cat Power, The Mars Volta and Trent Reznor, plus some additional backing vocals from several other notable figures, I'll Sleep When You're Dead is, too, ambitious in scope, stitching together a vast array of clashing sounds. And therein lies the genius of both this record and El-P: the production. El-P's beats are a spectacular mess, so mind-bogglingly removed from the typical kick-kick-snare, that they leave you feeling a little off-kilter, trying to find some semblance of pattern or consonance.

I'll Sleep When You're Dead is also, on par with the music, quite lyrically dense, mixing three parts paranoia to two schizophrenia. Naturally, El-P's typical bragging and self-aggrandisement is in no short supply here. And, just as naturally, it's hard to begrudge the man when it's quite clear that his hyperbole is backed by some of the best production and rapping in the game.

I'd like to tell you that I'll Sleep When You're Dead is a classic, as a few people have already claimed, but I rather suspect I'll be listening to this record in a few years time, still trying to figure out just what the fuck is going on. Whatever it is, it sounds impressive, and I suggest you give this record a listen. 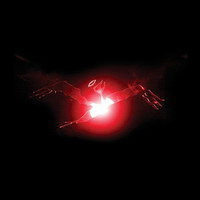 (I'll briefly mention, mostly to be a cunt, the first song, "Tasmanian Pain Coaster," which El-P has touted as being one of the best things he's ever created, is not that special. This has more to do with the fact that The Mars Volta guest on that particular track than the song itself. The Mars Volta are obnoxious assholes and I cannot take them or their music seriously.)

there are angels there
you know where they keep angels?
heaven, that's where