Lord, do I hate skits. There is nothing worse than the flow of the album being interrupted by a pointless, moronic skit.
I decided that I would never buy another hip hop album that had a skit in it. This decision was recently overturned by the recent purchase of the recently released Mr. Lif album 'I Phantom'. Recent/Recently.

To be fair, 'I Phantom' is a concept album that charts the journey of a man (unnamed (so as to be indicative of human beings (I guess))) who quits his job and college, and, to quote the Dead Kennedys, attempts to cleanse himself of the system by finding meaning in his life while removed from that 9-5 existence.
Mr. Lif, I think, sees this life as being nothing more that another facet or type of colonialism.
However, he quickly realizes that without money both his social life and his artistic aspirations are severely limited.
By the by: the narrative isn't told solely by the lyrics. For example, one of the songs features a sloppy and badly produced beat that is supposed to reflect his financial situation.
After deciding that in order to survive in this world he is going to have to 'play the game'. He gets a job and completely immerses himself into it. His complete dedication to his job leaves his family feeling neglected and they subsequently leave him.
Then shit gets out of hand: his daughter kills herself and the cop who responds to the call - who having snapped — kills both parents.
The narrative starts skipping to different points of views that are all connected with the narrative.
A 'conversation' between a modern day man and a tribesman during which the views of the tribesman are subverted and tainted to the point that the voice of the tribesman becomes the same as that of the modern day man — a desire to control and conquer existence — is explored. This attitude leads to a nuclear holocaust during which the views of four different people are stated.
Given that the narrative is so complex I don't mind the skits as much because they help push along this gigantically winding and often obtuse story.
Understand: I didn't figure out the story by myself, Mr. Lif explains it in the booklet which is a shame cause I would have enjoyed the challenge of understanding what the hell was going on.
I can't believe I wrote all that simply to explain why the skits weren't so bad. Oh, well, live and learn, rape and turn.

On with the review: The production duties are handled by El-P, Edan, Fakts One and Insight.
It's, musically, a really strange album. As noted above, some of the production is supposed to suit the narrative of the songs which is pretty exciting, I guess.
The beats are really good, the music sometimes changes in the middle of a song to follow either a different perspective or a different stage of the narration.
For example, the third song is 7 minutes long and is essentially split up into two songs complete with radically different beats and music but, since the narrative is connected, it's tracked as an entire song.
The song 'Live From The Plantation' changes musical style three times during its duration.

The album is only 47 minutes which is great because hip hop albums tend to be too long.
The last few hip hop albums I bought — Blazing Arrow by Blackalicious and Phrenology by The Roots — were 74'23" and 70'23" respectively.
While both are great albums, it's hard to listen to them from beginning to end in one sitting.

The album case is covered with all sorts of crazy stickers that announce a special competition in which - if you find the Golden Ticket - you can win what have been described as "outrageous prizes". Given my luck, I knew that I wouldn't find no Goddamn Golden Ticket.
I'm not too disappointed as my idea of an outrageous prize would be a pig in lipstick or a punch in the teeth or getting punched in the teeth by a pig in lipstick.

Just recently Jimmy Weasel, his sister the Munkee and I saw Mr. Lif in concert. I'll leave it up to him to review it (if he wants) as he jotted down some of the horrible rhymes that the opening act spat and actually bumped into and chatted with Mr. Lif in front of the venue.
Incidentally, Jimmy asked Mr. Lif about his hair which looks like this: 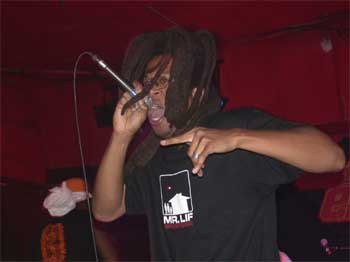 Whatever story he tells will be much more exciting than mine.