Directed by guitarist Kristofer Steen, Refused Are Fucking Dead documents the last tour of Swedish hardcore punk band, Refused. Ground down by years of relentless touring and growing disillusionment within the band Refused Are Fucking Dead gives us an inside look into the ultimate implosion of Refused, presenting footage of the very last songs they played together.

The documentary is filmed as a series of interviews with the band members in which they piece together how the band came to exist and the ideology that drove them. Though it lasts a brief thirty-eight minutes, director Steen has put together an engaging and surprisingly arty documentary replete with a nice mix of live and candid footage of the band.

There are two extras on Refused Are Fucking Dead. The first is the The Shape of Punk to Come, Refused's masterpiece and, surely, a yardstick against which hardcore punk music should be measured, performed live. Unfortunately, it's not all footage from the same gig, but, then, that's probably a little too Pink Floyd for anyone's taste. The second extra is the video clips for "Rather Be Dead" and "New Noise," the latter marking, incidentally, my first exposure to the band.

If you're a fan of either this band or punk music, I suggest you pick up this DVD - you can get it at most places for just over twenty dollars. Some Kind of Monster it is not. 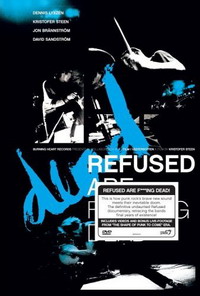 poisoned my fingers / burned out my eyes