We Jam Econo: The Story of the Minutemen

Directed by Tim Irwin, We Jam Econo is close to being one of the best band documentaries I've ever seen.

The documentary follows Mike Watt around as he reveals the story of the Minutemen and, in doing so, the story of punk rock - albeit, a type of punk rock that, by dint of its innovation, creativity, and refusal to be constrained by trends, is sadly in short supply these days. Watt shows himself to be an extremely passionate, intelligent, and equally principled individual, and his insight into both the band and the scene that he helped create is enlightening.
Of course, it really goes without saying that the story of the Minutemen is also the story what was quite obviously an intense and beautiful friendship.

The documentary features interview footage with over fifty luminaries of the American punk and underground scene - and, when I say luminaries, I refer specifically to moments like when an interview with Jello Biafra is followed straight after by one with Ian MacKaye.
Additional to the documentary, the first disc includes a few tasty bonuses.
The original videos for "This Ain't No Picnic," the Three Stooges inspired "Ack Ack Ack Ack," and, finally, "King of the Hill."
There are also nineteen deleted scenes and interviews, which, admittedly, it seems the director was right to cut out of the documentary as they are often either meandering, not particularly interesting, or feature a subject "umming and ahhing." However, these snippets are still worth checking out - whilst the story of when Thurston Moore first met Mike Watt isn't exactly Earth-shattering it's still nice to see, well, Thurston Moore and, more importantly, his gigantic fucking record collection.
The final extra on the first disc is an uncut interview filmed in 1985 at Bard College. This particular interview features quite extensively in the documentary, and, accordingly, the best bits were used, so there nothing particularly revelatory about the rest of the recording. It is, however, still of interest as you get to see the band jerking around and enjoying themselves in the sun between questions.

The second disc is a fan's wet dream come, collecting 62 songs performed live over three concerts. A few of these tracks were featured in the documentary proper, but it's nice to see what a Minutemen gig looked like. Of particular interest is the 1985 Acoustic Blowout, filmed in Hollywood, California, as it features D. Boon and Mike Watt on acoustic guitars and George Hurley on bongos. The quality of the footage isn't the best, naturally, but it is better than nothing - and, whilst you might complain about quality, you certainly cannot about quantity.

Holding everything together is a sixteen-page booklet with photographs, filmmaker notes and liner notes.

We Jam Econo: The Story of the Minutemen is an excellent documentary charting the all-too-short existence of one of punk music's best, most innovative bands. The asking price for this two-DVD set is just under thirty-five dollars - a price worth paying for the concert footage alone. 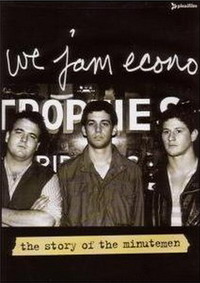