The Spanish have been churning out some remarkable movies recently. For example, a Spanish film of interest out at the moment is Buried, a “single setting thriller,” in which we see Ryan Reynolds thrash around in a wooden box for just over 90-minutes.
Due for release on the 18th November, however, is Agora, a film that is almost the exact opposite in scope and intention of Buried. Of the two films I suggest you save your money for the latter.

The film opens in the city of Alexandria, then part of the Roman Empire, in the 4th century. Christianity is no longer outlawed and the Roman Empire is, in fact, in the process of becoming Christianised, leaving Alexandria the last bastion of pagan belief. In this world we meet Hypatia, played ably by Rachel Weisz, an excellent actor whose casting is usually enough to ensure a return on the ticket price.
Hypatia teaches the privileged at the legendary Library of Alexandria with the help of her slave, Davus (Max Minghella). Davus is secretly in love with Hypatia, but as a slave is in no position to act on his feelings. During the lessons we meet two of the brighter students, Synesius (Rupert Evans), who has recently become a Christian, and Orestes (Oscar Isaac), a pagan – albeit a rather relaxed one – who is also, though not-so-secretly, in love with Hypatia.
Hypatia, for her part, is a proto-scientist/feminist of sorts who floats above the petty social and political changes taking place in the city. She rejects Orestes’ advances as she is wholly more interested in exploring the nature of the universe than in becoming a wife and a mother.

Davus, a non-Christian – though willing to take a flogging from Hypatia’s father to spare another slave – is increasingly drawn to the Christian world. He sees a Christian preacher, Ammonius (Ashraf Barhom), seemingly perform a miracle by walking across a pit of fire – a test a pagan fails, which is understandable, given he was thrown head-first into the flames. Davus does, however, get to witness the power of a genuine miracle first-hand as he sees the faces of the poor and the destitute light up with gratitude as he feeds them his master’s bread. Davus, however, is still torn between this new spiritual world and his love and loyalty to Hypatia.

As the number of converts to Christianity grows they become more confident in challenging the beliefs of the pagans. Lively debates are no longer so restrained, and when the pagans find the Christians mocking and throwing food scraps at their gods, they decide to retaliate by launching an ambush. Unfortunately, having underestimated just how many Christians there now are, the pagans find themselves quickly outnumbered and take refuge in the Library of Alexandria. Hypatia is shocked at the violence on both sides and she vows that her students, Christian or otherwise, will not face any retaliation whilst they are under siege in the library – a vow given potency by Orestes’ sword.
The siege of the library ends when an envoy of the Roman Emperor states that the pagans are to be freed from the Library and that they are to not face any further retribution. However, the envoy also declares that the Christians are to be allowed access to the Library. This prompts the pagans to flee, taking with them as many documents and scrolls as they can carry. Davus takes sides with the Christians and helps destroy the library and its sacred texts. He returns to Hypatia but with the intention of raping her. When he can’t bring himself to commit this act he passes her his sword, but Hypatia frees him instead.

The movie skips seven years into the future: Orestes, now a Christian – but still dedicated to Hypatia – is the prefect of Alexandria; Synesius is the Bishop of Cyrene; Davus has joined the Parabalani, ostensibly monks who bury the dead, but more accurately the armed wing of the early church; and Hypatia is still trying to unravel the mysteries of the universe, and, in particular, trying to reconcile the heliocentric model of the solar system that was proposed by Aristachus of Samos.

As Hypatia comes closer to discovering the secret of the Earth’s orbit, that it follows an elliptical path not a circular one, she is drawn against her will into the reprehensible designs of the leader of the Christians, Cyril (in a brilliantly slimy performance by Sami Samir), with disastrous consequences.

The film is a humanist’s dream, the sort of film that you can imagine would have Richard Dawkins or Daniel Dennett crowing from their seats. The director, Alejandro Amenábar, originally wanted Sacha Baron Cohen to star in the film but Baron Cohen refused saying that (in an amazing show of self-restraint, given the sorts of films he has made) it was “too prickly, and it would lift sores.” It is true, therefore, that religious people – in particular, the Christians – don’t come off very well: after all, we see them take on the pagans, and then turn on their former allies, the Jews, causing the latter to be exiled. Furthermore, the Parabalani carry, as a matter of course, swords and sacks full of rocks, just in case any non-believers need stabbing and/or stoning.
Hypatia, on the other hand, whose agnosticism is hinted at, is one of the most moral characters in the film, and certainly the one with the most noble life goal. She says at one point, speaking of the mysteries of the universe, “If I could just unravel this just a little bit more, and just get a little closer to the answer, then... then I would go to my grave a happy woman.”
It would be unfortunate, though, to walk away from such a beautiful film with the idea that its intention is to bash religion and/or religious people. It should be noted, then, in defence of the religious characters, that the final act of mercy in the film is performed by Davus, and that Davus, increasingly wary of Cyril's intentions and suspicious of his methods, had earlier dropped his sword and his stones, but not his cross. Furthermore, despite everything that Orestes stood to lose, he refuses to be goaded by Cyril into forsaking Hypatia.

Agora looks beautiful. It does what all good period-films should do, and that is to leave the audience so immersed in the projected world that they forget that the events took place in the distant past. It’s telling in a way that of the fourteen Goyas for which the film was nominated, the seven that it did win were for categories such as Best Cinematography, Best Costume Design, Best Make-Up and Hairstyles and Best Production Design.
Alejandro Amenábar’s direction is very good. Scenes are often introduced with a camera shot focusing on the Earth and slowing zooming in to the action on the ground. This helps emphasise the cosmic narrative being played out in the film over human one, which is arguably the less important one.
Rachel Weisz is, as I said, a terrific actor, but she is also a seasoned one. Kudos should also go to the young ones making their way up in the industry, especially Oscar Isaac, who I believe after excellent performances in Balibo and Robin Hood is on his way to bigger and better things. 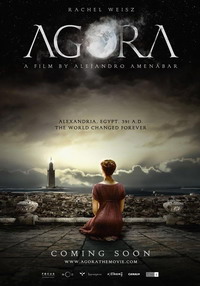 Also directed by Alejandro Amenábar, The Others starring Nicole Kidman and Christopher Eccleston.