Gira was in Swans.

The earlier pieces, those dated between 1983 and 1986 (though some were revisited in 1994), are shorter and more unvaried than the rest. Most of these stories are written in the first person and generally share similar themes — being repulsed by your own body, discovering a sense of identity in being raped, beaten, etc, and, somehow, feeling contemptuous of your attackers because, as it stands to reason, if they define you by their torture, you must necessarily define them by your being tortured, or something. These stories basically remind me of Gira's Swans lyrics from the same period. Most, in fact, share the same or similar titles.

The later pieces, those dated between 1993 and 1994, are somewhat longer, and feature a heavier incorporation of traditional story writing elements (I'm mainly referring to plot, here). These stories, though often just longer, more complete variations on the self-loathing stories of ten-years prior, are also more engaging, showing Gira's growth as a writer.

The Consumer — the whole collection, now, not just the first section — is a difficult book to read: the reader, after all, is constantly bombarded with rape, violence, human excreta, blood, cum, piss, shit, supernatural horrors, submission, sadism, masochism, etc, and often in the same story. It must be mentioned, though, that, as horrible and confronting as the writing is, The Consumer never descends into self-parody is a testament to Gira's writing ability. Of course, I'm still not too certain what the point of his ruminations, beyond a general sense of self-loathing, actually are, but then that may very well be the point.

I'm not entirely sure what kind of person would enjoy reading this book. I know I picked it up because, as a fan of Swans, I was curious to see what kind of stuff Gira would be writing. If you do like Swans and you happen to see this book lying around I'd probably suggest you buy it. However, I'd also advise you to read a story or two in the bookshop first because there's every chance this book will make you pretty fucking uncomfortable. 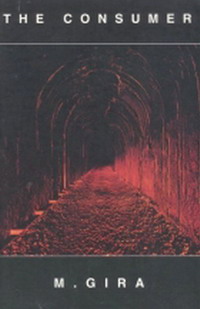 "Naturally, I now love Jesus very much," he said, "Yes, I love him so damn much that I would like to crucify him all over again!"