Angels of Light - We are Him

When M. Gira toured through Australia earlier this year on the All Tomorrow’s Parties bill he played a few sideshows, including one at The Basement that I was fortunate enough to catch. At that show, Gira played some songs from We are Him. What was notable about the performance – aside from Gira’s booming vocals – was the simplicity of the arrangements. “Promise of Water,” for example, on the night, consisted solely of a shuffling guitar part and judiciously stamped feet.

On the record, while the shuffle is still there, it is embellished with violins, chanting, percussion and ends with a slow crescendo. “My Brother’s Man,” was another song that received the deluxe treatment on record when stabs of harmonica and guitars were added to another simple riff.

Angels of Light can be viewed as an exercise in taking Gira’s relatively simple songs and adorning them, making them more sonically textured. And with every new record Angels of Light have unquestionably improved. Part of the reason that this particular album is so successful surely rests with the impressive roster of musicians that Gira has pulled together. Most of the players can be found on the Young God Records roster, including the manic Akron/Family, but some like Bill Rieflin are old hands that have been kicking around forever.

Now, you can just make it out, but on the cover of we are him there is, near the church in the background, a cat dressed as a cop holding a truncheon. That same cat/cop can be found on the back of the record, only this time the puppy is missing, his milk has been spilled and the crow is crying. We are Him is a menacing record, which isn’t be particularly surprising as M. Gira has made a career writing menacing songs. With this batch of songs, however, the menace is pervasive. Take, for instance, the first song “Black River Song” in which a “Black River runs, beneath this ground. Black River flows forever, but he makes no sound. He runs through me here now, and he runs through your children too...”

Violence lurks underneath the surface of all these songs. “Sunflower’s Here to Stay,” which on first listen sounds like a hippy paean, soon reveals its true apocalyptic-vision colours, when the professed sunflower becomes a monster holding the world between its jaws. Or if something a little less metaphorical is your thing, then you can’t go past the “Violence, violence, is in these bones, is in these lungs...” of “Sometimes I Dream I’m Hurting You,” a song that becomes out-and-out manic as Gira calls upon the Almighty Lord for retribution, perhaps, or divine punishment.
And if there is violence in these songs there is coercion too. Gira’s creative force, an entity of sorts he calls Joseph, for whom Gira writes a song (and to whom he dedicates the record), is another compulsive force: “there is no place to run from Joseph’s truth. His hands are on your throat but feeding you.”

By the time we get to the last two songs, the two ballads that close out We are Him, “The Visitor” and “Star Chaser,” we realise that we have listened to something very substantial... and yet the talk has been that this will be the last Angels of Light record. If that’s true, it’s unfortunate, but it might be a small comfort that they are going out on such a high. When asked why We are Him was looking like being the last Angels of Light record, Gira replied, “How long does it make sense for someone to slam their head against the wall, before they realize maybe it’s best to just step back and walk around the other side...” An odd sentiment from the man who has released one of the best records of his career. 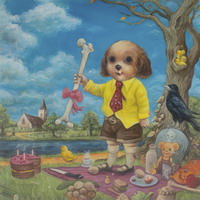