(The Jicks now feature Janet Weiss of the late Sleater-Kinney.)

It's somewhat disconcerting to note that Malkmus' latest effort despite being a song shorter than its predecessor is actually a good twelve minutes longer. Even more disconcerting are the opening guitars — which wail quite readily — and the opening lyrics, "of all my stoned digressions..." In short, Real Emotional Trash threatens to be a stoner nightmare, full of never-ending guitar jams and short on what could comfortably be described as songs.

Make no mistake, this album is a guitar album, which is perfectly fine, especially if you have the stamina for that sort of thing. Unfortunately, though Stephen Malkmus is an extremely talented guitar player, he also carries with him a tendency towards overindulgence in that department.

"Dragonfly Pie," that first song, however, soon reveals a catchy vocal melody and with it, a fuzzy, honest-to-god pop song. This, then, is Real Emotional Trash. Sure the songs are a little long and sure they sound a little "classic rock," but they are also freewheeling, catchy and lots of fun.

Part of the success of this record is that the band — and if Malkmus is a talented guitarist, well, so the individual Jicks are just as talented in their own right — sounds like a band, something that was missing (though, truthfully, not particularly missed) from the previous album.

Lyrically, the album seems more guarded than Face the Truth, or at least more difficult to penetrate, but as it took a little time for the snippets of "truth" of the previous album to expose themselves, it's possible that there's still something in the new album that's yet to divulge itself.

You should probably buy this CD. 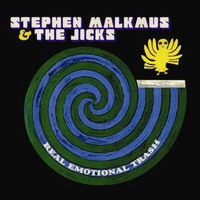