If you listen very closely to “Closer,” the song that opens My Disco’s new record, Little Joy, you get a hint of what direction the band is heading in: it’s the same note repeated again and again with same intense precision but this time around the note is allowed to ring out a little more, to breathe. It’s not much of a change, but for a band as militantly minimalist as My Disco, that’s really about as grandiose as it’s going to get.

This isn’t to say that Little Joy is a retread of their previous record, Paradise, it’s just that it isn’t as much a huge leap forward as it is a quiet shift in objective. The biggest update that the band has made is in the role that the drums play in propelling the songs. This time around there is less an emphasis on the shards of droning guitar-noise that characterized Paradise and more on pounding, hypnotic tribal drums. If this sounds like I am describing krautrock, that’s because I essentially am: the second track (and first single), “Young,” settles after a minute or two of cymbal crashes into a motorik beat that churns for the rest of its almost nine-minute playing time, and, as with all motorik, it’s not the beat that carries the emotional guts of the song, but the slight variations in the beat; the rimshots, the cymbal crashes, the slight shifts in intensity.

For those who love guitars, though, fear not! The guitars, though somewhat diminished in role, are still a vital ingredient in Little Joy. “Sun Bear” drones hypnotically and beautifully, and the song kicks into gear with a blink-and-you’ll-miss-it squeal of feedback. Furthermore, by having opened up their sound a little, My Disco have managed to introduce some emotional texture into their previous dissonance. Needless to say that texture, as in “Sunray” or “Lil’ Joy,” is mostly melancholic.

Those last two songs bring me to the lyrics. If Little Joy is the sound of a band opening up a little, the same can’t be said for the lyrics. By the time Paradise was released, the small fractured poems that served as lyrics on the first album had largely been reduced to stumps, more adornment than an attempt at communication. Little Joy pushes this inclination even further. This time, however, the vocals are further buried in the music and are harder to make out. I’m still not quite sure, for example, whether Liam is singing, “Sun bear or honey bear” or “Sun bear, a holy bear” on “Sun Bear,” and the point is that it doesn’t really matter: the vocals have become another instrument, another part of the musical landscape.

When I first saw Little Joy in the record-shop, I wasn’t sure whether to buy it, figuring that My Disco had gone as far as they could with Paradise. However, My Disco have managed to surprise – and pleasantly – with Little Joy: having reduced their sound to the bare essentials on Paradise they are now in the process of reconstructing it. The next time I see a new My Disco record I won’t hesitate in buying it. Little Joy, and what it promises, is far too exciting for that. 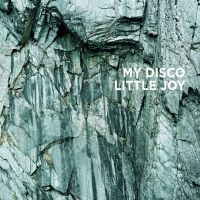