Two things stand out about the opening to Jack Charles V The Crown. First is the acknowledgement that we are on Aboriginal land, the second is footage taken from Uncle Jack’s documentary, Bastardy, which shows him shooting up heroin. I am grateful for the former as it’s something we don’t see often enough, especially for a craft which I consider to be quite progressive. The latter made me squirm in my seat.

This tension permeates a lot of Uncle Jack’s life: he is a proud Aborigine, an elder, but was also a member of the Stolen Generations; a pioneer of indigenous theatre in Australia, but whose acting career was broken up by stints of addiction and gaol time; homosexual, but an issue he had trouble coming to terms with.

As a result of his addiction, Uncle Jack earned a jam-packed criminal record. This prevents him by law from forming a cooperative, which he wants to do so he can enter prisons to rehabilitate inmates by imparting his other great craft, pottery. This, then, is the crux of the case that Jack Charles is bringing against the Crown: he wants his criminal record expunged, arguing that it prevents him from being of service to others.

It’s a very simple play. There is a potter’s wheel in the corner to which Uncle Jack returns to occasionally, it representing a stabilising force in his life, a three person band providing music, and Uncle Jack telling his story by referencing photographs and footage from his documentary. This is interspersed with musical numbers, songs from Uncle Jack’s busking and stage days.

Uncle Jack reveals himself to be charming, charismatic and extremely funny – he reveals at one stage the irony of being refused entry into the United Kingdom because of his criminal record noting that it was the British who once used Australia as a penal colony. It’s been a tough life for Uncle Jack and despite his wry take on it, he presents a thoroughly convincing case for having his record cleared.

The play was staged Upstairs at the Belvoir Theatre, which is the perfect size for this type of intimate performance. There are a few moments when Jack Charles flubs his lines, but rather than detracting from the performance, it blurs the line between the performance is ostensibly is and the intimate conversation it feels like. 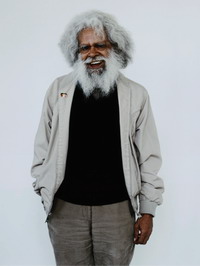