I was introduced to Here I Am director, Beck Cole, and supporting actor, Marcia Langton, at the same time: Cole directed Langton – the firebrand historian, who called a racist a racist – in the series First Australians. Here I Am brings these two women together again.

Shai Pittman is Karen Burden, an indigenous woman recently released from prison. Karen has lived an unhappy life. Her younger brother died when he was young, and there were years of drug addiction, a habit supported by, it is suggested, prostitution. Furthermore, Karen has lost custody of her daughter, the gorgeous Rosie, to her mother, Lois (Marcia Langton).

Karen wants to turn her life around, specifically to be a good mother to her daughter. However, on leaving jail she finds herself toeing a fine line between re-offending and going straight. She sleeps with a man she meets in a bar for the price of a motel room. The next morning she is woken up by two cleaners, one of whom is her mother, Lois. Lois isn’t particularly pleased to see her daughter and it becomes readily apparent that there is some unresolved animosity between them.

Karen has accommodation in a shelter for Aboriginal women and there she meets a group of women who come to be a support group. All of the women here have had difficulties in their lives, be it with drink, drugs, abusive relationships, etc, and all of them are at various degrees of putting themselves together again.

The manager of the shelter organises an interview with the Department, and Karen is awarded supervised visitation. This, together with a blossoming romance with the thoroughly decent Jeff (Bruce Carter), suggests that Karen could be on her way to getting her life together. However, during the visitation there is an accident and little Rosie is taken to hospital. Will this derail Karen’s life or can she, with the support of her new friends, persevere?

The cast and crew were seemingly sourced from a loose-knit community, some were related to the director, some had previously worked with her; one was a psychologist that the director turned to for advice and another was spied on the street waiting to see a show and was recruited into the film. The result of this rather unorthodox casting means that there was a sliding scale of acting experience amongst the cast, and it sometimes shows. However, far from detracting from the film it actually makes everything feel more authentic.

The film’s tagline is “The Hardest Person to Forgive is Yourself” and part of being able to declare “Here I Am” is to acknowledge where you’ve been. The film is as much a film about redemption and forgiveness as it is one about acceptance. Here I Am is at times an emotionally difficult film to watch, but it is also, ultimately, a profoundly important one. The film is a success, which will undoubtedly allow more of these types of stories to be told. 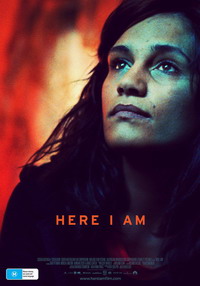 Here I Am is in cinemas from June 2