It’s ironic that as the debate rages about whether Australian film is too depressing, one of the best movies due soon for release is a comedy, a romance and a superhero movie.

Ryan Kwanten is Griff, a socially withdrawn office worker who is bullied at work by the pugnacious Tony (Toby Schmitz) and coddled by his well-meaning brother, Tim (Patrick Brammall). At night, however, Griff is a different person. Alerted by a sophisticated surveillance system, he roves the streets in moulded body armour protecting his fellow citizens from evil.

Pursued for being a public nuisance by Detective Stone (Anthony Phelan), it becomes clear that the world Griff inhabits exists largely in his own head. Furthermore, this isn’t the first time that Griff has been led astray by his imagination, having already had to leave Adelaide due to his odd behaviour.

Tim introduces Griff to his girlfriend, Melody (Maeve Dermody). Melody is also something of an oddball, believing that if she aligns the molecules of her body, she will be able to pass through solid objects. As Melody begins to fall for Griff, Griff has to decide whether the world of make-believe and the promise of love will be enough for him or whether it is finally time to grow up.

Ryan Kwanten is excellent as Griff, imbuing the character not just with a sense of melancholy but a sense of being out of step with the world in which he lives. Kwanten, who did his time in a series of Australian television shows and is now making moves in the United States with his role in True Blood, has a knack for picking meaty roles in Australian movies: Red Hill is highly recommended. Equally impressive is Melody’s Maeve Dermody. Dermody, who we last saw in Beautiful Kate, is shaping up to be another of Australia’s best actors. I only hope that if they ever get around to filming Murray Bail’s Eucalyptus, they consider Dermody for the role of Ellen Holland.

Asked to explain why Baz Luhrmann has received forty million Australian to film The Great Gatsby despite the non-existent Australian content, Screen Australia chief operating officer Fiona Cameron stated that "The idea that [Australian creatives] can't work on anything other than kangaroos and koalas really smacks of cultural cringe." Griff the Invisible is Australian filmmaking of the highest order, one of the best films of last year, and there’s nary a koala or a kangaroo in sight.

Griff the Invisible opens nationally on the 17th March. 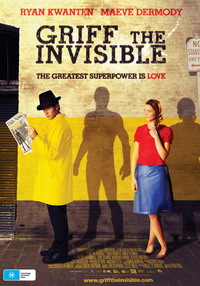