Following the events of the first season Sarah Lund, feeling somewhat responsible for the death of her partner, Jan Meyer, has been living in semi self-imposed exile in the isolated town of Gedser. Ulrik Strange, sent by Lennart Brix, turns up and asks Lund for help in a case in which the body of a woman was found in a Copenhagen park commemorating the Danish Resistance in World War II.

At first Lund refuses to get involved but as she is to go to the capital for her son’s birthday she agrees to do Brix the favour of looking over the notes from the investigation. It isn’t long before Lund notices something that everyone else has missed and, after a second person is found murdered, she is on the case, much to the consternation of Brix’s superiors and the delight of her new partner, Strange, who begins to develop feelings for her.

Parallel to this, the Prime Minister, in need of a new Justice Minister after his former one suffers a heart-attack, appoints Thomas Buch, an idealistic but unblooded politician, and quickly directs him to negotiate with the opposition and other minor parties a new Terror Bill that could potentially see Denmark’s cherished democratic values compromised by new security measures required in the post-terrorism world. (Post-terrorism?)

As the case unfolds it becomes increasingly clear that there is a connection between the murders, the local army barracks and the possible cover-up of a crime in Afghanistan.

There is a lot about the second season of the The Killing that is very similar to the first: a murder has been committed, Lund is investigating, and the case, ever increasing in complexity, threatens to suck the lives of innocent people and, potentially, another government into its maw.
However, there is one important difference: this second season of The Killing contains only ten episodes as opposed to the twenty of the first. This means that the increasingly complex twists and turns that bordered on the silly in the first season – I mean, how many times did Lund and Meyer drag Troels Hartmann back to the station? 10, 15? – are gone.

The intersection between the three strands of the narrative (Lund, Buch, and escaped ex-soldier, Peter Raben) is handled more gracefully this time around, and with the body count increasing the twists and turns that the case takes seem more plausible. At just ten episodes, the second season is an improvement on what was already an excellent piece of television drama. More importantly, at just ten episodes, you can get through it all in one sleepless night. 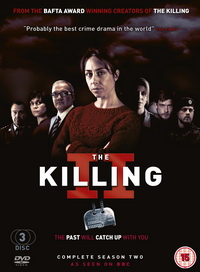