Of all the fake elements that make up this record – the Joseph Lieberman endorsement, the back catalogue, etc – there’s one aspect that rings true: that the bulk of the album, ten out of the eleven songs, were recorded between 3:00 and 3:35 pm.

Yo La Tengo are the Condo Fucks, and the Condo Fucks are Yo La Tengo bashing out, and recording quite badly, a bunch of old rock n’ roll covers; covers of songs by The Kinks, The Beach Boys, Richard Hell (+ others) and an in-spite-of-everything still sweet version of The Troggs, “With a Girl Like You”.

This is an indulgence record for the members of Yo La Tengo, as it will be for most punters, but it is a lot of fun. If you’re a fan of Yo La Tengo, you’d like to see them cut loose, and have a spare twenty bucks lying around, you can’t go wrong with Fuckbook. 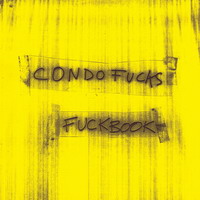 what'cha gonna do about it

And for those interested, a few weeks ago Matador announced a new Yo La Tengo record to be released early September this year.