The cover of Bill Callahan’s new record is a Paul Ryan painting, Apocalypse at Mule Ears Peak, Big Bend National Park in West Texas. The painting is an impressionist one. Similarly, Apocalypse is something of an impressionist work, creating a sense or a feeling without focussing on the details.

How else does one explain the first single, “Baby’s Breath”? A beautiful song whose meaning remains tantalisingly obscured. Is the song a lament for a lost relationship or for an aborted child? Is the altar he and his girl rushed atop a church altar or a surgical table?

Ultimately, Apocalypse is a folk album rooted in Americana. It’s no coincidence that the song titles on the back of the record are written in Rio Grande font, the sort of font that once proclaimed the town of Tombstone or the O.K. Corral in American cowboy movies. Neither is it coincidence that the first song, “Drover” – another of those obscured metaphors – is about the wild, wild country that breaks the strong, strong mind.

Both “Drover” and “America!” are driving, thumping songs – the latter, subverted with some skronking guitars, sounds a little like Callahan’s “L.A. Woman.” The other tracks are gentler mix of ballads and waltzes that are helped along by fiddles and tinkling pianos. But at the core of all this instrumentation, however, and lifting the song writing, is his voice. As usual, Callahan uses his cool baritone to devastating, mesmerising effect, and brings us tantalisingly close to piercing his songs but never disappointed when we cannot. 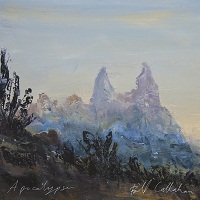