Racist epithets are the best kind of ethnic slur. Parts frothing at the mouth, a glint of mania and a whole slathering of ignorance, it's a nice chunk of overt xenophobia. On the other backhand, you have the shying away. Boycotting that cuisine. Stepping back quietly or crossing the street.

Both ends are the same. Creating distance between you and the other person. Usually of some other ethnic bent, trait or region. Hipsters stop eating sushi when a Japanese whaling story comes out. They rage on with the protest only line up for dollar rolls at the end of the day a few weeks later.

Throwback to the tail end of January of this year. A climate of young weather beacons and the civil uprising and revolution in the Egyptian streets. Two weeks later, the ousting of President Hosni Mubarak.

Egypt's revolution is of the young people storming the palace.

Amidst the roll and rollicking of the factions of dissatisfaction, calls for the US to cut ties and distance themselves from the Mubarak regime.

"We do not want to send any message about backing forward or backing back," [US Secretary of State] Clinton said in response. What the U.S. wants to do, she said, is "to help clear the air so that those who remain in power, starting with President Mubarak ... will begin a process of reaching out" to those demanding reforms in Egypt.

Clearly when you can not move either forward or back, you're standing still. And no where else is this more frustrating than at the buffet line as the portly man in front of you stacks his plate with shrimp and cocktail sauce (you'll need layers of sauce between the layers of shrimp for better, cohesive stacking (it's simply how you have to tackle the bain marie)).

In this case, the US Department of Agriculture and First Lady Michelle Obama orchestrate a parallel move away from the ever cryptic food pyramid toward a new food plate after the sour taste in things Egyptian took its toll. 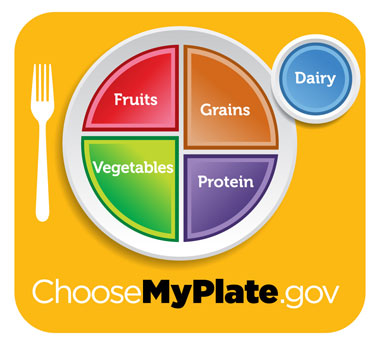 Five months is enough development time to design and shuffle the portions into the recently relaunched aid in a balanced diet. If you have anything still digesting in your stomach after five months, best see a doctor. That isn't right.

Dropped onto the table in June, MyPlate does away with the thin pie slices of the many iterations of the pyramid scheme and opts for a dietary guide based on the never sated plate.

Is that cup of blue ice cream cheese going to help with your march haemolysis or osteoporosis woes? Who knows. Maybe doctors on the bill of dairy farmers can tell you that.

With MyPlate, a single fork is provided. No knife. In the world of eating plenty, finesse goes right out the window to shovel more, to shovel quick and we're still at ℵ0. This maw's needing moar.

This isn't on the scale of Freedom Fries. This is a whole meal. Or parts thereof. Or at least those that they can fit onto a standard plate that covers up your entire gut.

This is more than clutching at fluffy clouds. More than some exercise in experimental psychology. It's a revolutionary and monumental change.