This is what we're talking about: 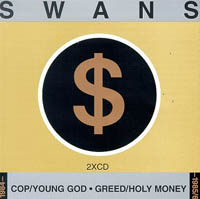 The way to break in a Swans record is to confine yourself to a corner of the room and refuse yourself permission to do anything other than listen. This, in fact, is the only way to listen to a Swans album.

The CD, Cop/Young God/Greed/Holy Money, as you can possibly tell, brings together three Swans LPs, Cop (1984); Greed (1985); Holy Money (1986); and the EP Young God (also 1984).
All are available in a convenient double CD reissue with a bunch of bonus tracks thrown in for good measure.

The first two albums, Cop and Young God, sound pretty similar. The music itself is primitive, with loud guitars squealing and squelching out vague rhythms that are accompanied by cavernous, thumping, crashing drums.
It should be noted that the music here is painfully slow — the songs drag by at a snail's pace and there is, in the 70-odd minutes of music, little to no change in dynamics.
It is almost impossible on the first few listens to differentiate between the songs.

Over the top of these already punishing sounds, Michael Gira, the most depressing man in the universe, recites what is essentially the most brutal, uncompromising poetry ever.
Below are the lyrics for the song, "Job."

Or, even better, the song, "Raping a Slave."

You get the general idea...

Basically, the first CD (the first two albums) doesn't stray too far from this pattern, which, naturally, makes listening in one stretch something of a chore.

The second CD, consisting of the albums, Greed and Holy Money, is something of a departure.
This time around Michael Gira finds himself sharing vocal duties with Jarboe, a former prostitute. (Well, she's described it as "unorthodox sex work.")
Needless to say her songs aren't particularly cheery either.

The difference, however, between the latter two records and the earlier two is that there is now a greater shift in dynamics.
The music isn't always as painfully slow — the band is now experimenting a little more with drum machines and different, albeit still somewhat arduous, tempos.
There is also a hint of the orchestration and the samples that would come to have a prominent role in later Swans work.

Again, Greed and Holy Money aren't albums for the faint of heart, and, again, it will take you quite a while before you'll feel confident enough to differentiate between the songs.

However, it would be remiss of me if I said — despite all of the negative publicity I've afforded these four Swans records — that they aren't worth listening to.
There is something undeniable cathartic about this music, and whilst it's true that they are completely draining it is also true that you'll sleep like a motherfucker come nightfall.

Swans have distilled all the negative shit about existence that we generally don't like talking about into sonic little packages that we otherwise refer to as songs, and, in doing so, have created a listening experience that is ultimately unique.

leaving is a test that I've never had to take
here's my last thought, but it's sad for me to say