I suppose that if a band were going to release an album that consisted of two tracks but also of one, it was going to be Japanese band, Vampillia. I’d never heard of this band until I came across a promo copy of Alchemic Heart, which is a little surprising as the album features Jarboe (ex-Swans) on the first track and Merzbow on the second, two artists that have always been on the periphery of my musical tastes.

Alchemic Heart is a sort of meditation on the world, specifically the sea and land, after which both tracks are named. The link is tenuous it has to be admitted, as it is a little difficult to reconcile the title of the songs to the sounds contained therein, but, then, if it’s a meditation on the world, it is one that’s filtered through the bastard science of alchemy.

The first song, “Sea,” starts with sweeping strings and tinkling pianos. Over this Jarboe recites, or perhaps performs, a rather dark poem. A sample: “I breathe in despair / I breathe in the loneliness / I breath in the rage...” Towards the 12-minute mark heavy guitars hit and the rest of the song becomes a cavernous drone that would have made Swans proud. The song dies down and Jarboe recites the rest of the poem. This time, however, it has become a message of hope, or perseverance: “I breathe in darkness to breathe out light / to breathe out fire / send it to everyone / breathe out... peace.”

The second track, “Land,” is a retooling of “Sea,” a remix by Merzbow spliced with his own noise/sounds. It is less organic, obviously, than the first song, but it follows almost exactly the same template. The song builds in intensity and the guitars kick in at almost the exact same as they did on the first track. From then on it’s another noisy drone-fest, only this time the whole thing bleeds together more and Jarboe’s operatic vocals are more noticeably layered on top.

Both tracks are just under 25-minutes long, which makes for rather difficult listening. That said, Alchemic Heart is a fine record and a fine addition to any avant-garde collection. 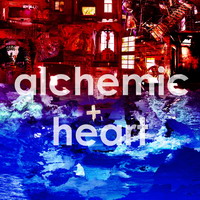