Soon after Swans had decamped from our golden shores in March last year, an e-mail was received from Young God Records offering the chance to purchase a limited edition double CD recording of their recent performances. The double album was intended as a way of raising a little money to help cover the cost of recording the new Swans record. So quick did this live CD sell out that it was decided that a regular version would be made available, also a double CD.

The recordings were mostly taken from the Melbourne performance except for two songs (one recorded in Berlin, the other NYC). You can hear M. Gira thanking “you beautiful Australian people” at one point on the first CD, lending any Australian listeners a gratifying immediacy. This is still true for those of us who didn’t make the Melbourne show.

The live recordings feature long stretches of ambient noise: long introductions of percussion, of chimes and bells, that build in intensity and then settle into more… orthodox… droning guitar and drums-driven numbers. This especially seems to be the case of the newer songs, and perhaps speaks to the direction that the new record will take. It all bodes well.

As for the older songs, a few are taken from Swans’ last album, My Father Will Guide Me Up a Rope to the Sky, including a part of “No Words/No Thoughts,” and that record’s best song, “Jim.” The other tracks are taken from earlier Swans’ records, some going back as 1984’s Cop, though this line-up’s version of “I Crawled” pales in comparison to the one sung – I say sung… – by Jarboe, available on 1998’s Swans Are Dead (Live ’95 – ’97).

The performances captured on these CDs are of a band that is sounding assured of itself, no mean feat considering that the gigs were a way for the band to workshop the new songs, but also not so surprising when you take into account the talent that M. Gira pulled together for the tour. The sound quality is excellent and the songs are stitched together so seamlessly that it feels as if you are actually listening to one two-hour concert, which is significantly longer than the gig I remember.

On the Young God Records website M. Gira suggests listening to these two CDs at a generous volume, arguing that, “it’s all about immersion.” It’s the best advice I’ve received in a long time. 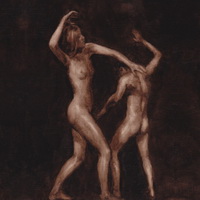 We Rose From Your Bed with the Sun in Our Head