Wheels on the bus go round then down

Business suits, rarely seen straddling riding crops and jodhpurs, are natural magnets in grey cities for those pedalling their bare knees with a reckless abandon for exposing the inner and outer wrinkle-fests of the seated regions.

Thronging and swerving the footpaths, nearly hitting or missing prams, pedestrians and plodding transients, bicycles are only one cog in a vehicularly-weaponised self-eating drive train. 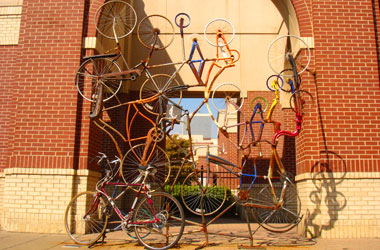 scene of a bike pile-up

Anorexic, the spoken frames trigger a macabre gift-giving trait in its obese cousin, the automobile. One such being door prizes that await all (un)lucky bikers hewing too close to the insanity of lethargy's edge. Swinging for a non-miss, it's a complimentary entrée, filled to the pastries with pavement and broken bones.

Parity correction in turn spins from the crackling and static off the citizen's band interfering with a road trip. Down desolate highways and crowded freeways, trucks and semis ride hard on the bumpers of family vans and small cars. Buffeting against the wind is only half the problem.

Dealing with a dose of whiplash from the breach around leaves one in a urine-mixed drool after waking up under the flickering lights of a restroom with no soap in the dispenser. Only a seatbelt, hubcap and your wits are the tools left to your survival. Read the stars of the harvest moon to find true north and the way out of your own faecal matter.

Sweating up the cab, truckers, they what bury their consciousness of sleep, dost seeth visions asplendour of insects and dropbombing roadkill the size and shape of cinder blocks and rocks. But these projectiles, from deselected humans, are still from pedestrians. Soon again on foot and on the run after the screech and smashing of broken glass.

Pedestrians, who, even in the guise of a business suit decking Roman numerals for pinstripes, are people all the same. And these people, like us, are fodder and accelerant in the engine that eats itself from within without either a metal chassis or skeleton.