Anywhere she went she gave the same impression of herself, that of a slice of watermelon: juicy and crisp in the first few bites but watery and bland the more time one spends with it.

Her early life followed the same pattern as a piece of that fruit. In the beginning, though morally questionable, it was full of adventure. We’re talking turn of the century here, and finding oneself unceremoniously discarded in the city of Brisbane by an errant spouse at the turn of the century usually meant access to only one or two less than respectable professions.

To avoid this she drifted north hoping to find work in the sugar cane fields. The money wasn’t terribly good and the work was hard, so when she was approached by one of the overseers with a plan, she listened carefully.

Festooned with cheap fineries she went to work blackbirding young men from Vanuatu, Papua New Guinea, the Solomon Islands, etc, even the Cape York Peninsula, to work on the cane fields. After a trade ship had finished loading or unloading its cargo on one of the islands she would lure an unfortunate onto the boat with the promise of sex. He would then be knocked unconscious, stored in a false compartment and sailed back to life as an indentured in Australia.

She realised, at the end of another blackbirding trip when they opened the secret compartment only to find the young Aboriginal man they had snatched from the Peninsula dead, the damage she had done in her short life.

One arm, which had broken during the scuffle, had swollen up to twice the size of the other. He had died looking like a fiddler crab. His eyes were wide open and he was drenched in sweat.

She traveled back south after this, past Brisbane where things had gone wrong, past Sydney, down to rural New South Wales where she lived the rest of her life working at the newly created Country Women’s Association of Australia. There she sorted correspondence and received payments for fees, quietly, until the day she died. She didn’t begrudge her life. 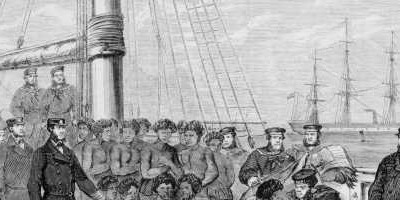 take these broken wings and learn to fly