Falsetto of food, a chorus to consumption

Arthropods, of the crustacean kind, boiling in waters across kitchens and cookeries, create a diegetic soundtrack enveloping their own musical misery. Charmingly chiming the noses of those salivating the praises of butter and bibs. Lobsters, prawns and crabs, ready to turn off the dark and bring on the bright colours of cracking an exoskeleton.

Squealing as they do — like otters squeeze-begging for dear life under the vise grip of the platypus come to collect on inking out their poison (of which the otters get high off, but the high lasts only so long and the premium is so high (but not as high as the high from the injection of ankle spur venom (it is, after all, quite the cocktail)) — the shell splinters and separates against the flesh. Keeping a sinewy connection just enough so as to see many use and abuse nutcrackers while sucking eyeballs to vacuum that last piece of crab flesh far deep into the tips of the claw.

For those sensitive to the plight of sea creatures previously living "happy" lives in fish farms and off the fat of the land to fatten the pan, the high pitches are dying screams of terror. 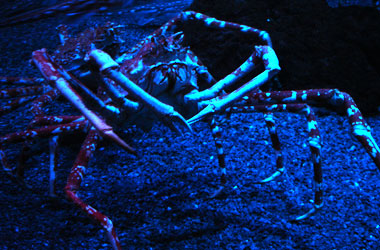 Sympathetic ears will hear these cries of pain as life ebbs away to create the foundation of a wondrous broth that can be used later in many other meals. Teardrops of empathy which can also salt the soup. Seasoning enough before the taste of recycling your own body waste pauses even the most savant cannibal in waiting.

Serendipity waits for no one but those who listen carefully to the boiling pot. Hear not the screams and shrills, nor the perception of pain and suffering. Instead, the sing-a-long of active voice. The sighing ahhs and eeps, relaxing in a very hot bath and wishing you a succulent meal. Lest the cook cooks too long and renders rubber with no chance of erasing a wait in vain.