Deconstructing a set of construction workers

Settled in 27 July 1987, at a time when the upcoming Bicentennial was leeching into the public present consciousness, a small band of construction workers were set to stage themselves a fine little ochlocracy.

Never mind that however. They had a hunger for some olla podrida. And it was their downfall. Out before the start.

Worth their pepper of a salty Monday, they (who at the time counted among the hundreds of thousands listening to curly-haired pop) grew restless at their situation, troughed both a lack of pay and safety audits on the site.

Escapees and refugees of the subjacent inner city, they sought an unclearer future out in the lush deciduous suburbs. Casting their fresh elbow grease and soft milky hands into the cement mixers of short-handed brickies, this was the life.

Sheer excitement of working with the common folk enough to cloud their judgement and perception of fair conditions. Though only to a point, and only to a point of pliable discontent. 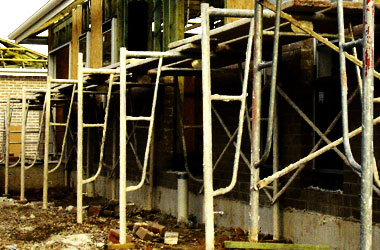 Legs are only as good as the knees before the buckle

Long hours and short breaks, it was the stuff of actual honest, back-breaking work. Far removed of the days leafing through magazines and brochures. Of seeing what other theatre productions were being staged and what avant-garde art installations to muse and peruse.

Quite heavily, they were of the thesaurus breed. Of using polysyllabic words to pick apart their social prey behind a mask of affected sophistication. Basically, propping themselves with elongated consonants.

This set their inner-city outer crew against the other workers of the lot. More inclined to speak in clear language, as blue as it may be. It was succinct and to the point.

Among their ranks, a business school dropout by the name of Perch Sanders saw an opportunity to rid himself of their kind while stepping over to the more worldly true blue collars.

The workers from the inner-city on the suburban plot were looking to take control and finances of the construction. The InCiters wanted it their way, and were planning to bring about a more bourgeois scene. So of their own ability that they did not notice when Sanders spiked their potpourri pork and beans with a little cement.