Coming up to spoil the second third of the weekend of shut-ins and agoraphobes, as well as those who have tingles when stepping back on school grounds and other places of public congregation, the Queensland state election of 21 March.

Leading up to the polls, the Queensland Public Sector Union are finding themselves lock-sighting Liberal Nationals candidate Lawrence Springborg in their cross-hairs. His bluster over making some 12,000 or so public sector jobs de-necessary gathering much in the way of ire and euphemism entanglement.

Aiding their viral and grassroots public awareness campaign, the QPSU run Stop Springborg with a little game of tug-o-war. On one side, the little people of the public sector fighting for their jobs. On the other side of the divide, a monster-sized Springborg. 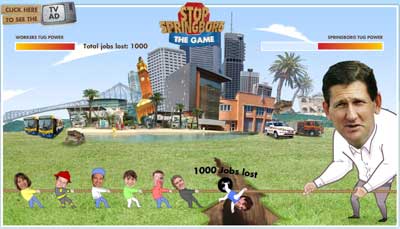 With a little help, everybody fails

Mousing up with carpal tunnel, the aim of the game is to muster the strength to topple the gargantuan force of Springborg. After the forgone failing, which in turn signals the loss of 1000 jobs, the site goes to referral mode and suggests that a better way to tackle the problem is to fatten the numbers.

In multiples of three, the tug line grows and so supposedly does the power of the little workers. Work any way but freeze and the result is the same. One by one the little workers yanking at the chain fall into the crevasse and out scream another thousand jobs.

With one lone tugger the most to lose is 1000 jobs. Increase the army of voices and the slab splatters aplenty.

The more recruits to help a campaign to topple the monster, the more it becomes de-necessary to do so.

Lesson here is simple: Stand up alone and fail, you fall alone. Stand up and fail with friends, you fail them all.

Labor retain Queensland over the Liberal Nationals - Labor leader Anna Bligh also becomes the first woman to seat as the Queensland state premier. Springborg and the LNP manage to at least claw some seats away from the repeating party in power.