Ponds cannot hold the catadromic & neither can rivers, lakes or post-holes. It is a terrestrial pon farr, one that drives eels out of the rivers and the lakes that they’re used to and into the wide Sargasso Sea. Constellations don’t do the epic journey justice: John Hill’s Anguilla is hidden, waiting in an umbra created by greater numbers of lesser fishes.

But where the constellations have failed to honour, the Japanese have succeeded... and all it took was a zesty vinaigrette. A vinaigrette, and, of course, the appropriate preparation. The toxin derived from eel blood serum, toxic to humans and other mammals, was an insurmountable barrier to consumption. So galled were eels by the treachery they suffered that their very blood curdled: eels rankled and killed those that ate them.

The process of cooking – smoking and otherwise – breaks down the toxins and leaves eels exposed. And there in the Sargasso (& other sites) where eels spawn, their thrashing is like Sirena’s call luring any and all that can make the harvest.

There is something in Crowley’s Thelema: the coming age is not of Ma’at, however, but of Wadj-wer, and by the time we see in the eel the Pharaonic crook, it will be too late. 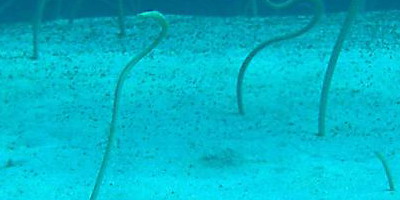