Social avoision: Lifts, elevators and riding the quiet within

Little boxes on cable wires. Little boxes on the building site. Little boxes riding up and down all day long. In hospitals and on train station platforms. Even in posh, three-storey, marble made estates — where maids sponge the crevices behind your knees with oils squeezed from virgin beans off a private isle along Kangaroo Island.

Little boxes known as lifts. Or elevators. Death traps of mirror dull metal work. Dungeon of the social interactive scene and in many office environments, the closest thing to a standing hallway jousting match.

Forces people from many levels — or not of any levels of any kind — to at once face each other (murderously even acknowledge one another), shuffle, and enjoy what little ride they may endure to their destination. 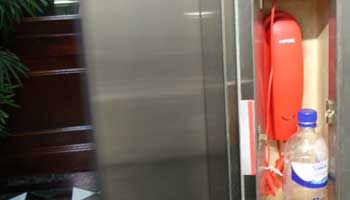 Nobody expects the emergency lift phone to work

Some take this opportunity of having nowhere to run to engage their co-workers and bedpan swillers in the mighty art of "catching up" or bleeding a conversation from the lobby. Akin to public jabber on mobiles, only without the mobiles.

Nobody feels comfortable with talk in elevators outside those locking mental drips. Why persist?

Even biding time while rescue workers save them from swimming any longer amongst the bone and entrails of a fear-willing passenger now half themselves, thanks to a sudden catch between floors, it's awkward.

And as riding alone is a luxury only those hiding behind the button panel can afford, and not to seem overtly rude (for fear of office politics backlash or a shank between the ribs), there may be a way to keep the voices inside.

Key to stemming this is to find a way to wedge a stop block between the talkers. Sacrifice thyself gently or manoeuvre the rest of the company into such a hold so as to spread distance between the yapping maws. Distance enlightens these creatures into acceptance and slowing down their excavations of minutiae and how long the day is. Who wears pants? They may even shut up.

Failing that, find a way to creep the onion petals off each of the lift travellers into obedient silence. Staring in the opposite direction of the opening doors and other faces does a trick. As does light coughing or clearing throat between syllables in their exchange. Invading hygiene space versus talking into strange ears; one throw unsettles the other.

What of not-so strangers trying to talk and/or chat with you? Of people who wish to ask even the smallest of questions? Be polite but mindful and masterfully push the spirit zero talk.

When answering, best retort with "Yes," "No" or "No idea, was like that when I got there." Even a simple acknowledgement and quiet "Hi" with a slight nod will do wonders to quell any uprising.

Making eye contact will render any vaccination of noise moot as this is a sign of interest, however fake, and ruptures the gushing lungs of talk and how you do more than silence knows what to do with.

Little boxes all the same, a little quiet for the sane.