Latency is key when dealing with the remains of the day of the dead. Their leftovers, ashes and crumbles, on this here mortal soil leave opportunities for recycling and reuse until their memories are eventually scrubbed off the face of recognition. As people die, timing becomes another step in keeping up the false appearances for those in time of mourning, noon and night. That and a plausible back story lest one finds confrontation at the hands of grieving friends and family members.

Where there is a road, there will be a potential or previous scene of incident and accident. Car crashes most likely. Young and old, wrapping and warping to a vehicular pretzel on the side of a busy or not so busy street. And soon, flowers in full bloom and wrapping paper crop up like seeds in their memory.

For those rushing late to another ceremony, or in some other need for flowers and bouquets, these are the cheaper alternative to the roadside florists. Opportunists themselves who in all likelihood have set up their businesses on said sites to further capitalise on low inventory for slightly modest returns.

Be wary of littoral memorials though, sand gets into everything.

Should a weeping mourner happen upon the scene at the time of decluttering, merely point out the need to clear away the dying debris in honour and (false) memory of the deceased.

Cut flowers are already dead and dying. No need to reinforce that fact at a death magnet. 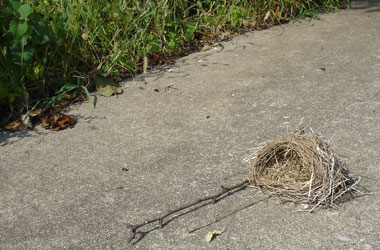 empty is the broken home

Ghosts on the family patio

For strange beings wanting attention and the company of others, attendance at funerals, wakes and ceremonies provides an instantly close, and at the same time distant, extended family.

The glob of sobbing rellos looking for a shoulder to cry on or an ear to caress is the family that is not a family. A precipitous drop at the end of proceedings and that's it. Dust off the ashes and walk away.

Rescue shelter mentality does offer the chance of recurring fake families. A repeat and call around to earlier mourners is the second round interview for those souls looking to find another family to their own. In time, they may even mourn your death.

All you can eat over the dead

Wakes are the ever-hungry's best friend. Or at least a one night stand. Food and drink on an open slather, for all to get and gather around talking and reminiscing over the corpse. One which may not even be above ground by the time the caterers roll around. A decidedly good move on the host's behalf when the funk starts and chowing down on a stranger's free nosh riles up the nose.

If you don't match ethnically with the gathered mix, a fabricated story of being a long lost relative finds itself on the racking table and under more suspicion. Leave that and explain it away by association of social or business circles.

There are enough resources, from the obituaries to wake notices, to build up a rough enough history to parlay. Don't bother with recluses. They backfire in possibly having to stay in touch with the relatives for a time after looking for any connection, however tangential.

Funerals and wakes, like weddings, are where many people gather knowing the focal point, and satellite enough to let slide the faces of unknowns for the sake of the occasion. Play this to your advantage.