Alone against all comers is the Esphigmenou monastery. On a peninsula more accurately referred to as the Self-governed Monastic State of the Holy Mountain – and hiding in the shadow of Mount Athos – one monastery wages war against nineteen others.

ORTHODOXY OR DEATH, reads the banner, and in the reading is the renunciation of the Ecumenical Patriarchate of Constantinople as well as the Church of Greece and its associated hats. Christos anesti.

At the heart of the matter is a rejection by the monks, zealots now, of the gestures of conciliation directed towards the Roman Catholic Church (that other great institution of hats) by the Ecumenical Patriarchate. Having broken spiritual – and, in fact, bureaucratic – ties with Karyes, they are now in schism, and have been declared illegal.

The abstemious diet – olives, mainly – belies the fire in the belly of these renegade monks and their renegade abbot. They subsist now on sympathetic donations and live on fumes. Loquaciousness has given way to angry bristling; living in seclusion, especially when undertaking religious vows, disposes one towards both silence and the necessary facial hair.

Eviction notices have thus far been ignored; a fandango of biblical proportions is brewing. Christos anesti. 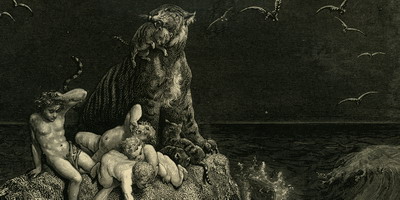