Working to void one's area of unnecessary materials and garbage is the responsibility of all good citizens and comrades of the nation and state. Of the neighbourhood it is of utmost in keeping with appearances of cleanliness and doling of order from the chaos of refuse.

Near communal access repositories danger lies in interactions causal and casual with fellow human beings in a state of dispossession.

Unwanted and unwarranted, a ferocity stains the fingertips, brainstems and cargo pants of persons throwing headlong in the treasure-free dump.

Be careful, be wary, be observant of the direction in which the hands yield or cradle. One direction for all inward keeps many from bleeding on the grounds of broken shards, smashing pots and clanging pans to have at at the cast-offs.

The militia are nowhere in sight. The junta know better than to stand between a dog and its sawn-off. Especially on bin night. 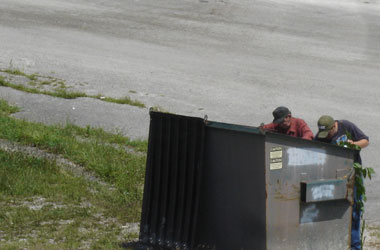 Under daylight their nocturnal habits bloom

Centuries from now historians and archeologists clamour in the middle of the night — that twilight period between dusk and the train is late again — scrambling to cut and slash each other's throats with all matter and manner of ostracon. Not far from the domestic shattering, clues to all, for none whatsoever.

To the victor goes the spoiled imprint, of all the discordant fabric that is product life spans too short to register for.

If you buy it, it will eventually end up in landfill. Build it and it will last you as long as the neighbour doesn't lend a hatchet to your skull.

With more nuance and social distrata than the age old warfare of Fibros and Silvertails, they who write and annotate the history books lick their quasartic quills and scribe the events as best they imagine fitting their narratives and dreams.