Anti-clockwise from the City Circle

Tuesday it was. The humidity was on, and the rain played along with it. The car stopped. The whole train stopped actually. One of those platform rests where all the passengers kept talking across each other, asking and not asking about the delay. The voice from the ceiling spouting a vomit of crackle and static. Clearly.

A group of young men jumped down into the vestibule, scaring off the old couple. Putting their earbuds to the metal poles to generate the soundtrack for the next few minutes, the men started their crip walk. It was sloppy, and cramped, but they wanted to show off and make a noise of it all. The rest of the car turned their heads and looked out, the sun sneaking behind some clouds now.

The old man reached across and put his arm around her. The gold-rimmed watch glinted in the light, the cheap metal flaking. A gift, from his time taking notes for a bureau of the Hanseatic League. Disbanded after a while. The secrets following them all, but never to any grave. There were none for a select few. 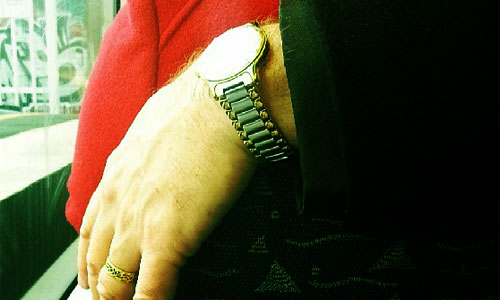 He hummed to her as she lay her head on his shoulder. Gentle and quiet, still louder than the earbuds on the metal pole. A single tear rolled down her cheek, he caught it before it landed. She was holding a photo and staring at the lifeless yesterday, lost of any future and tomorrows.

Their son, years, decades ago. The caulbearer getting stuck, the nurse fresh out of school and unsure of herself and what to do. The silence was it. The newborn was still and the film fell off eventually with a casual wipe. Afterwards turned into hours and then the next morning they stopped dressing down in all white.

The doors hissed. The car shunted.