The last record of PJ Harvey composed songs was the gothy-folk White Chalk, in which Harvey sang creepily in a higher than usual register. She appeared on the cover dressed as Miss Havisham and also toured in support of that record in the same dress giving the impression that she had finally gone mad.

Of course, PJ Harvey isn’t mad; instead, she’s terrifically clever and a very gifted songwriter – and White Chalk, on top of being an excellent record, is starting to look like her Swordfishtrombones. Let England Shake, thus, retains many of the new intonations of her previous record – the distinctive vocals, the folky arrangements and the eclectic instrumentation – but also builds on this, the most notable development being that one can actually dance to some of these songs, as evidenced by the bouncy xylophone-led melody of the title track.

As is clear from the title of the record Let England Shake is an exposition on Harvey’s home country, and not a particularly forgiving one. “What is the glorious fruit of our land?” she asks in “The Glorious Land,” before answering “its fruit is deformed children” and “its fruit is orphaned children.”

The lyrics read like an elegy of sorts for her beloved England. Harvey condemns “Goddam’ Europeans” who take her back to England, whilst acknowledging that “its dancing days are done,” that its blood won’t rise again. Harvey also returns to Gallipoli several times, and not with the awed reverence that we might, rightly or wrongly, expect, but unflinchingly, clear-eyed, as if those glorious battles shot England off on the trajectory it now finds itself.

The music is more dynamic than on White Chalk, and certainly less claustrophobic. In stepping back a little Harvey has allowed herself the use of a wider variety of instrumentation – trombones, violins and saxophones, for example, crop up several times in the liner notes, making Let England Shake by far the more expansive record.

White Chalk was a contentious album for many PJ Harvey fans, but Let England Shake proves that this canny songwriter and artist knew exactly what she was doing. And, after all, why shouldn’t this be the case after such a long and terrific career. 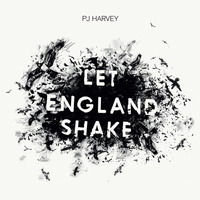