The title track from Blockhead’s last record, The Music Scene, summed up the record rather nicely. It had a psychedelic, thumping feel and a video clip that suggested nature being subverted by technology, or vice versa, it was hard to tell.

Interludes after Midnight, however, has more in common with The Music Scene’s predecessor, Downtown Science, which was an ode to NYC. However, Interludes genuinely sounds like the same city when caught in that moment deciding whether to come down off drugs or whether to get higher still, whether to keep on dancing or whether it’s time straighten up.

There is a nostalgic feel to the songs, but a feel that’s tempered with prescient adult knowledge®. In the lead-off track, “Never Forget Your Token,” a trippy voice intones ‘buy yourself an underground ticket/take the subway to the end of your line’: an ostensibly innocent line that nevertheless makes you think about death, dying or, in keeping with the drugs theme, pushing it further than is perhaps wise. Maybe it’s the latter as the third track, “Panic in Funkytown,” attests over a stuttering beat, ‘There’s always room for one more on the floor!’

And, further, on “Tools of the Industry”: ‘Tools are machines that help us work/they push and pull and twist and jerk/any monkey knows that we're no fools/he uses his tail, but we use tools’. This time the nursery rhyme is set to a sub-industrial beat and it ends with another prescient adult knowledge®-tempered warning: ‘Science has given man the power to prolong and enrich life and to end it swiftly in a single stroke’.

The music is grounded in hip hop, but it’s been a while since Blockhead has released anything as prosaic as a breaks album, perhaps only the first one really counts. Interludes After Midnight is thematically linked to Downtown Science, twinned even, but Interludes is the better record. Each subsequent record that Bloackhead releases has shown remarkable growth as an artist. Four or five albums in and he somehow keeps getting better. I’d be concerned if I weren’t too busy dancing my fucking arse off. 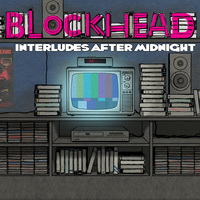