Bounciness in a moving walkway, or travelator, is a fine thing in the rush of connecting flights way too close to each other and without a pause for breath. Pounding the pace of the run between planes, there's a saving grace on the ankles and heels feeling the give of each stride. Truly a thing to be thankful for before sitting in your own sweat for the next four or five hours between a man spelunking his own nose and a woman in the crash position for the entirety of the flight.

Not every connection is a mad dash. Nor does everybody have a crackberry, laptop or even a book to waste away their time avoiding the high cost of airport kiosk food.

For those few, there's something like the space between the horizontal escalators of Terminal 3 of San Francisco airport. North Connect Gallery or the Connector Gallery. Whatever. Section F2 of SFO. Go there only after smelling other people's socks or from a flight docking at one of the gates. There you'll find one of the gallery/art installation/culture pauses in the airport.

Cubes and boxes. And plenty of them. As the other people stand or saunter along the walkway, bland perspex display cases hold a myriad of junk, collectibles or artifacts to gander at and add context to the plaques with mediocre hash indexes.

Across two times over the course of 2008, "Pottery from Catalina" and "Out of this World! 20th Century Space Invasion of American Pop Culture" take residence in the line up of feature items.

"Pottery from Catalina" showcases the pottery, dishware, earthenware and general pots and vases of the area. For inspirations in decor, rustic is certainly one word to describe this. Fragile another. Visually bland on their own, even the plaques fail to elicit much in the way of cursory information snippets beyond listing items and perfunctory descriptions. Most of which service enough only toward the next item. 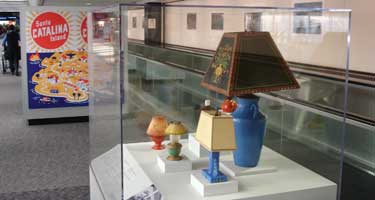 Only some cases allow gawking from behind

Read, take note, move on. Riders of the moving walkway may only peer through the glass backing, teasing for the other side.

More so than "Out of this World! 20th Century Space Invasion of American Pop Culture". Basically for lovers of science fiction. Ray guns, spaceships, robots and rocket ships. Weird fantastic projections of the future of space colonisation, alienation and exploration in the decades previous to this current state of disarray. Singularly eclectic toy shop. Flying saucers trapped behind a box. Plaques ticking off names of objects, robots and vehicles not unlike a catalogue of pottery and tiles. 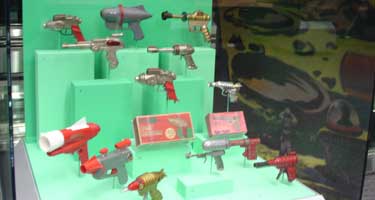 Confiscated by TSA off aliens 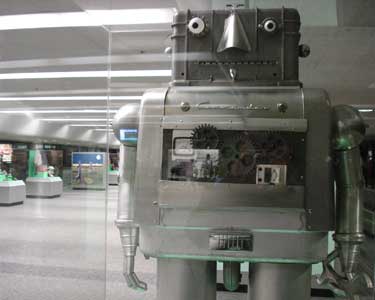 One of the robots by Clayton Bailey

Shunning passengers travelling off of their own forward motion, the gallery section is a long narrow necking presentation for carpet walkers. For a 360 visual experience, or even an easy trail from one to the next, this is not it. Zig zag or circle the inner track. Either way, prepare for a walk between display cases.

Long walk of the art gallery

Cash in a valid plane ticket in or outbound around gates 68-77 of the San Francisco airport to gander the geekery. A deflating soak in culture.