Terminal 3 of San Francisco domestic airport, ground floor. Not far from Two Wings for Wall and Person by Vito Acconci, an etching in 12 parts wasting away some minutes of time. Dropping $20 into a machine spits out an international prepaid phone card from Exactta Communications. Nearby, cattle of wayward luggage and suitcases idle next to the bank of phone booths and empty carousels.

Between escaping the card dispenser and making use of the face value credit, a long wait with minutes pass en masse. An hour at least. Calling into the customer service department, their help is with an accent Hispanic, and not anywhere near the sub-continent.

Not exactly a responsive crew, their estimates on activation time well off. One call, another call, another still and the need to remind them and refresh their memory as to the state of the status-in-wait card cycles. Not just minutes, but enough to eat a Subway or walk up and down the length of the terminal. Or to make use of the toilets again and again in order to keep from passing out after reading another quarter chapter of The Widow of the South. 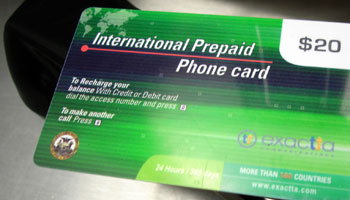 Numerous stabs later, no cutlery or silverware here, but at the dial pad, and finding that sleeping in a small metal compartment in the open is better left to homeless dwarves and midgets, the card rings through and true. Connecting the call...

Despite the showing of $20 on the corner of the card, the actual real use total value sinks a shallow half of that. Maybe less. Most of the credit sapped by the mysterious phone fee, the cost of calling from a public pay phone at $1.64 a pop. And lock. Then comes the cost of the call itself, pricey on the minutes.

Several times during the long layover between flights, either the card or the sticky numbers of the phone booth itself reroute the call back again to the service department. Personal code not working right. Lazy connection signals back to base. Screwy pulse dialling thanks to the Pelican pay phone. All things, anything, but who knows. Who cares really.

People do. People who are more than Soylent Green.

Does not make for confidence in a phone card to gamble hitting an operations block or making a call connect successfully. Back of the card itself, with the scratch panel holding the personal code looks instantly reused from the get go. Questionable state.

Each subsequent call mentions no update on the current balance. No hints or clues as to even how many minutes remain. Guessing is as good as knowing. Shooting deaf and wild, the card stops with no notice of even a beep or warning click a minute or even 5 out from nil. Absolutely none.