Sitting large on a table, a pile of programs wait just outside the field of vision to the entrance. Lining up in the morning shuffles you right in front of it and thus, more likely to pick it up. Walk directly from the registration booth and chances drop down dramatically. The one thing missing from last year was knowing what was on and when if you didn't have a smartphone or a printer at home to sketch out the schedule. Large hold newsprint in your hand with the details and times, it's open to being missed this year because of placement. By the end of the second day just as many sit there as the Saturday crack.

Also hitting downtown in one glob of people gathering is St Patty's Day celebrations, a gun show and Winter Jam (the Christian music festival). It's the second year of the Lexington Comic & Toy Convention and the hour before the hour is already thronging like a man shaking out the green stank beer. It's supposed to be quietish, but the VIP numbers are already clicking through the turnstiles in quick order. Two days with as many panels and more booths and stalls to see. A lot of returns, but some new setups and faces.

A large hunking dewback, two actors from The Walking Dead TV incarnation (Theodus Crane (giving out hugs all long) and Jeremy Ambler) and the 501st Legion all chokehold the opening before the floor proper. Things get messy, stuffy and a whole lot moshy when the 501st raffle off the props at the end of the days' hunts. Thicknesses. At the other end of the hall, clear space between the vendor tables and the back wall. 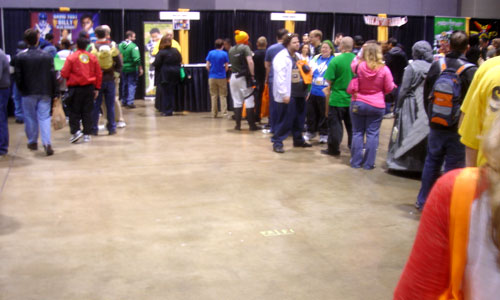 Lining up for the original Blue and Black Power Rangers

A lot of room and forethought for the lines all geared up for the Power Rangers. David Yost, Walter Jones and Jason David Frank generating the longer lines. It was even more of a Mighty Morphin reunion with Catherine Sutherland, Paul Schrier and Jason Narvy returning. Probably more than Billy Dee Williams at various times throughout the day.

Either a lot of people had the same idea to head to the hardware store before the con or the wrestlers' section was cutting down its own two-by-fours for the fans to get autograped by the likes of Hacksaw Jim Duggan and Greg "The Hammer" Valentine. The mill was constant that section of the floor.

For the most part the celebrities are thematically positioned near each other. Felix Silla's booth is right next to Carel Struyken. Margot Kidder and Cindy Morgan in one area just as Doug Jones and Joe Gatt occupy an arm's reach of each other. Over on the other side you have the artists alley with the likes of Jamal Igle, Janet Lee and Roger Stern. If you were only interested in a certain medium or gathering of artists and creators you could effectively need only visit one section of the entire hall.

A Jeep from Jurassic Park and the Ghostbuster's Ecto-1, both custom mods, park in the lobby outside in the fray of the incoming queue. A smart move that frees up convention floor space better given over to live beings and flesh maggots. Neither one allows sitting in the driver seat, but the plonks let you mit your fingers all over the chassis.

It's an empty room save for the nine people scattered about the 90 seats available. There are no pens to hand out and our host, Victor Dandridge, is fretting. A runner comes through with pilfered markers that we all have to hand back at the close. (It's not stealing if you hand back the markers, so why even bring that up?)

It's split between a classroom product pitch and "Understanding the Generic Superhero Mystique and Mechanics Thereof". Breaking down the variations of a theme clashes like a chafing neckscarf with squatting out a new superhero. There's no time to create when you're throwing back examples and trying to best that bloke in the front row point-of-ordering. Or at least that's how the room is wakeboarded when a little girl is the only one to whip up a character before the Q&A section. 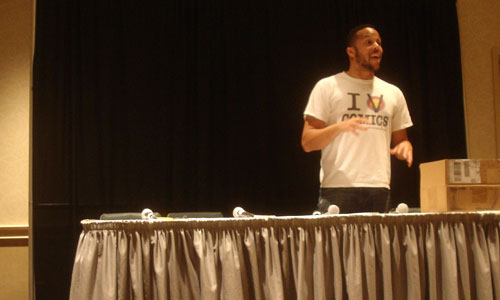 
Dandridge is engaging and ebullient and delivers to the room as if full to the brim and gushing with writing implements. There's another apology once more unto the break for not having any pens, but that doesn't matter. It's a good mind-cogging panel to start the weekend. Through the walls the cheers of Jason David Frank's martial arts demo help close out both Elkhorn rooms.

Costumers raise their game and kick things up a notch over last year. Dangling a $1000 cosplay prize might do that. Some include Predator, Rita Repulsa, Megazords and word of a NES controller. 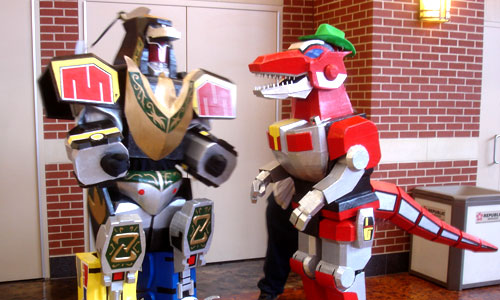 Asked what they're made of, "Trade secret."


One of the better outfits is a lo-fi work of genius of the Green Ranger cosplayer who scribbled all over a white jumpsuit with green marker and slapped on aluminium foil hastily on cardboard for the chestplate. It's not elaborate, but the slapdash look makes it one of the better handmade efforts. Little more variation than everyone dressing up as The Doctor.

Never got to see the person gearing it up in their own Dalek move about. Only a shell as the occupant went to the toilet. A weekend where at least half a dozen men are always waiting around in the toilets but none wanting to use the urinals. Stalls only for them. 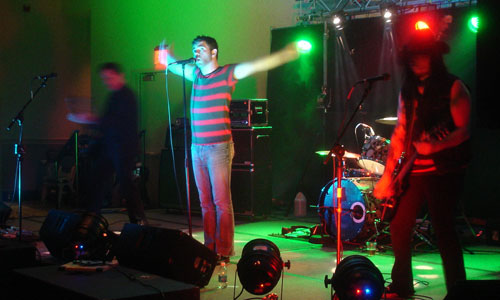 Freddy & the Cruegers at the VIP party

It's an intimate room of under 30 seated as Jason Faunt and Erin Cahill walk in with their cups of coffee. They both head to Gandhi for their favourite quotes and wouldn't mind another spin as their respective Rangers. They get on well together, joking like castmates who never lost touch and make for a friendly easygoing hour that's gone as soon as it starts.

Everyone asking a question either has two questions or a "good" question. Or two good questions. A lot of lifting away of manners. Those with two questions often repeat one of the questions, because who really sits there answering two when you asked for one? No. Ask one, wait around for another go. It's just polite. At least you're not someone who insists on letting people know you're a journalist every time you open your mouth. 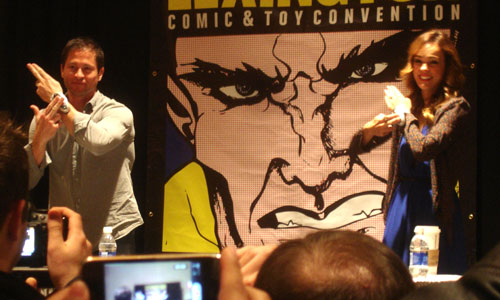 "Time for Time Force" with Faunt leading, Cahill laughing as she follows along

There are some "you had to be there" references to the previous night's Power Rangers After Dark panel (18+ only with no cameras or recording equipment (which according to acquaintances just meant a lot of cussing)). On talking sports and fantasy leagues Faunt is all over it. But then the gasps and shock horror spill out when asked about what Marvel Comics character he'd like a go at at portraying in the movies. Answering The Flash set off the mumbles. Cahill rests the rumour that eating dinner with Seal means they're dating.

Leave the bag in the car back through the rain of the second day and then you find yourself buying things from the booths with the few notes left. Now your sweaty hands are gumming up the covers and warping them. Booths don't have bags, it's easy to forget. ATMs within a block are all tapped out. Few vendors are using Square, so the cash economy rages on with its sane self-imposing limits.

Circle a few times and you'll pick up on things that catch your eye enough to fork money over. If you slow down or look them in the eyes they will try and lure you in. Sometimes you just can't figure out if the artist doesn't wants to be there or is off in their own world because a low table turn up has knocked them out looking past you. 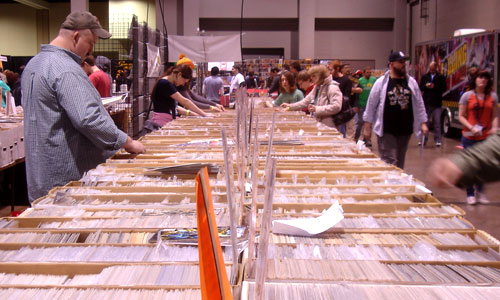 Hunting through back issues for Bill & Ted who never show