As with a lot of people, reading a book sogged in wet takes a toll on the whole. Way too friendly with each other, the fibres of the pages cling strong. Drip, let it dry and all is good again. And that's the feeling of reading Our Movie Year.

Pointless, go nowhere stories, highlight by their own presence the doldrums of waking life. Where there is no neat punchline at the final panel to sum up the day's outing. No final thought for the excursion.

This is the essence of Harvey Pekar, what he does so well with the mundane, and it goes over and again in this collection.

'Tis a heavy book if you're reading on your toes. Sweating in the summer heat, a muggy stain of 32°C beading a sweat and the crackle of waterlogged-no-more pages makes enough noise to crack the spine.

Chronicling the year of the release of the movie based on his first collection, the tome suffers from repeated repeats of repetition. 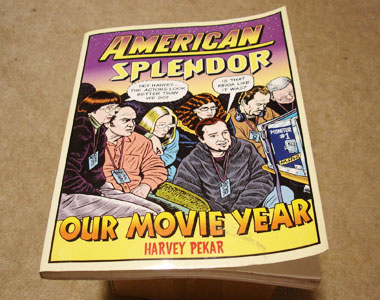 Where you would read one interpretation (as bought to artful life by various artists (R. Crumb, Gerry Shamray, Ed Piskor)) the next story soon after retreads the very same ground and same beats as the previous.

For those who hate reading the first half of a book to then forget what's going on, no fear, the book reminds you at various intervals as the drab drags on and flicks you in the ear as a fly gets caught in the spider's web. That you put there yourself because, hey, you like flicking flies into the spider's web.

And then, BAM! You're hit with a wall of text that pauses the neurosis of watching the behind-the-scenes frustrations and worries that haunt the days and junkets around a movie's release.

Dropping out into the shade, artists such as George Ade, Clifton Chenier and B.B. King get spotlights. The whole section doing as much to highlight the variance of skill in Gary Dumm's line work (who does a bulk of the art with his wife Laura on colours) as it does the breadth of Pekar's knowledge and fascination with these pioneers and breakout stars of the long gone years.

Pekar is beset with constant fears of sinking away into poverty and obscurity after the initial flow of popularity. No more plum writing gigs after the rush of fame. No more recognition of any sort. It's the fuel that burns the entire book.

There are logical rests at the end of some stories, but the whole "no kicker" feeling really comes apparent in those few stories where there isn't. Wholly offsets the flow and makes you think, "is there a page missing?"