With no less than five actors from the Zeo Eulerian circle it makes this convention a Power Rangers reunion. Jonny Fairplay is on his smartphone for the entire day and a man with haemorrhoids makes sure everyone gets a good look.

Every other comic table, and then some between the maths, features a bowl of lollies there to entice the cavities and rise up the blood sugar. "Free comic" calls out the artist from Doppleganger and the wife notes it soon turns to regret at the lingering questions about the back story or premise of the comic. There is none but that look of wistful glance, wanting to be rid of this botched link to Naughty by Nature.

Two men standing at the door of the rolling wagon of video games are just the typical hands you see outside the school gate, trying to lure you into the den of a little weed. It's not seedy but for the Rolexes they have up their sleeve, winner takes a dozen, VIPs play for free.

Aisles are thickening to a point where you have to shuffle your toes to creep through. One reason being a man prone in a bed/wheelchair is coming down the other way. But the flow continues to mud the centre aisles. The far end over by the concessions (where the workers hint that things are much cheaper a few minutes walk into the food court outside the gates) allows for some respite. There, the room opens up to see your feet and the SOLD signs on posters by Andrew Heath and a constant turnover of parents with their kids lining up for some art and autographs from Archie Comics' Craig Boldman. 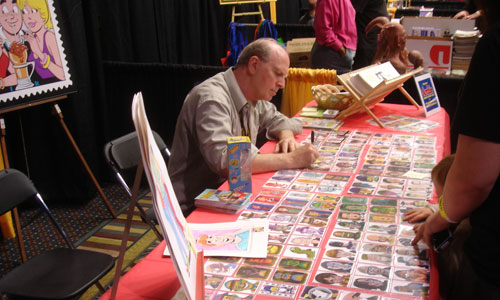 There is no schedule handout or one from their site. The only stash being on a related blog weeks before with no pin for easy reference. Even the ticket booth and gates have no idea and the fall back is tracking down one of the few wranglers running around with a walkie-talkie. Then onto the panels to create a few laps and doors left wide open to make sure you drown out the guests. 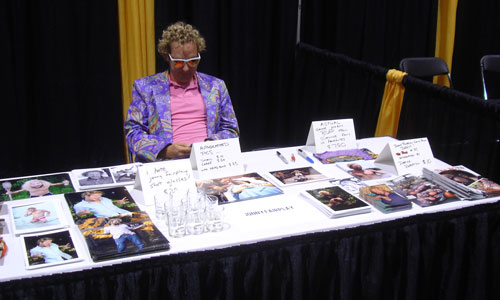 Lauding each other with warm introductions of the other, Grell (creator of Jon Sable Freelance) and Ryan (voice actor of Bumblebee from Transformers among many others) warp the time through literary archetypes, the evolution of character and the pitfalls of putting your work in the hands of people who have no idea what the story is about. The room leans on Grell more so, talking about the character of Jon Sable and his reversed reversal by network executives to neuter him into the same type of character that's played out time and again.

Writing for television with Dean Lorey

It's the second straight writing related panel as Lorey (writer for My Wife & Kids, Arrested Development) chews through the first half recalling the process and agony of the writers' rooms he's been part of. The 12-14 hour days, product placement, the constant fight amongst the other writers in the pitch, the read throughs and the rejections. Say nothing of the need for adult diapers in the rooms, there's light at the selection of nearby takeaway restaurants, feeding them through lunch. For those who didn't catch the lobs from the seats, Lorey sums it up before hitting with his answer. A good thing for those with an ear of static interference. The questions pick up at the end, before a few notes and tips on how to subject oneself to the rigours of even getting a foot in to writing sitcoms (be a writer's assistant or pay attention to someone with the ear of the showrunner) in the throngs of other writers trying to get their teeth on the bit. 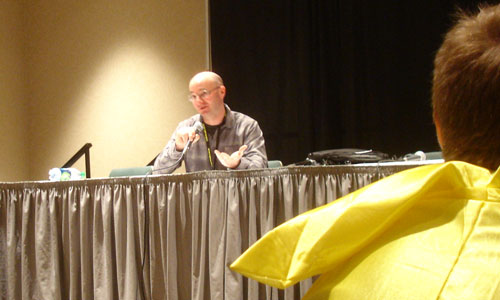 That is only one of two suns walking around

Hit the flush and the Elkhorn room clears out to see a promised line trailing back past the red carpet area in front of the convention wallpaper and with the familiar diamond shirts ready to take the front rows for the next slot.

Paul Schrier (Bulk) is already there, sipping a warm beverage waiting for the rest as Jason Narvy (Skull) runs up down the middle with muffin mouth. The two hijack the room for a micro Bulk & Skull panel, in before the rest of the Power Rangers saddle up. 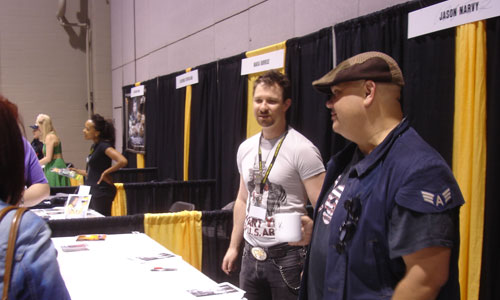 Back corner all day long a high traffic area

Straight into the forum and the questions find Jason David Frank (Tommy Oliver) for the most part. Short and back to them. Questions directed to the whole panel, which includes Catherine Sutherland (Kat Hillard) and Nakia Burrise (Tanya Sloan), fare not so well against those directly at the named.

The room knows full well the level of cheese within the show on its surface. One fan down front relaying fond memories of picking up on its morals and getting through the hard times. Frank says that a grittier version for the older set is a missed opportunity for fly kicks to the face. But that's not where the licensing and format is from on high.

The bio on Schrier says the man doesn't make many convention appearances, but all the talk and charisma says he's holding back. Throughout the day pairing up with Narvy, the pair rip through the crowds and their line is just as long as Frank's (who has two beret wearing guards lining up the autographs well into the parking lot out back). They steal the panel for the most part, talking about how much input and freedom their characters were allowed, from the wardrobe to their channelling of Laurel & Hardy after a few marathons of research. 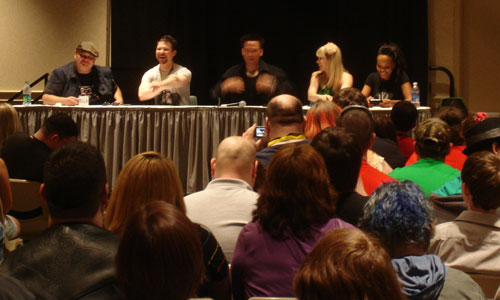 Arms are constantly floating toward the ceiling but then the hour is up and barely out before the room is once more emptied.

Frank teaches a mean punch, cutting in with the elbow on each pass with the first two knuckles where it's at. One of the guards warns the participants that they will not be happy at all if they find a ring cutting into them at a yank. This situation doesn't come up at all nor is there ribbing of the few who sign up but sideline themselves which was mentioned as the carpet met open toes.

Checking his watch here and there, the class is lean, clear and easy. The lull sets in to then catch out the many who fall out of step in the Sensei Says game of keeping your ear at the phrase. Frank's daughter is up on stage and her power has to be topped, a constant reference to the crowd at times short of pushing the full force behind their cut.

The Boy Wonder, Robin, runs off with the win as the sole entrant in the kids category and a twenty dollar bill. As there is no voice or sight of his parent(s), that's taking the game to the next level, probably there eating dirt from the fall of a trapeze act gone horribly wrong, but so right in terms of being in character.

The costumes don't file into the convention space early in the day, taking time to slide through as the sun takes a peak over noon and into second lunch. Four, then five Ghostbusters mug most of the time at the area set aside for standing where others are standing blocking the flow. And then they were six. Maybe eight at one point. The franchise expands itself like every non-canon universe.

Fark's Drew Curtis and two Ghostbusters, one from the 501st Legion in undercover gear, sit as judges as the parade of capes, spandex and a Nazi battle against the forces of op shop pickings, online extensions and sitting there at the sewing machine waiting on threads to wrap around. Marvel and DC taking all but a handful in the line up. A Scott Pilgrim has to take it out as the most hassle free, low cost cosplay in attendance. Background characters notwithstanding. A weeping angel from Doctor Who and of restricted movement and of even fewer unmumbled words, takes the $300 cash prize, the bills counted out on stage by the ten. 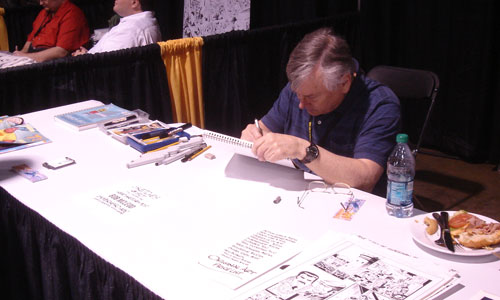 Bob Mcleod is letting his food get cold