The streets of McDonaldland are all now but a barren wasteland. Leaving behind a scorched and heavily salted earth, Dear Leader, Ronald McDonald, the only one to make it out alive. There unto the promised land he walks alone. Brown chairs, light brown tables and a sterility of upsizing the corporate image to a hipster café.

Years after the collapse, under the weight of trendy décor and apple slices as fries, the mystery genus of Grimace still picks away at those with cardboard tongues.

A taste bud. A stool sample. Perhaps a gallstone. Maybe yet some genetically-modified transfat glob. Ultimately the question remains: What is Grimace?

We know a few solid facts about the pear-shaped creature what clogs the arteries of many a Maccas munching mind.

Origin of the species

Grimace comes from an eponymous island lost, as can be witnessed in the direct-to-video tale, "The Legend of Grimace Island." The second episode of a by-commission series, The Wacky Adventures of Ronald McDonald.

As shown in the video he shares lineage with a long stock of Grimaces, many of whom share the same name. Their familial relationship often the only means of differing address. From that we know he's part of an endemic species. (The emperor of Grimace Island, King Gunga, sounds a lot like Milo Kerrigan.)

The first actual appearance is a villainous incarnation known affectionately as Evil Grimace. Who, through the monstrous dexterity afforded by four arms, steals milkshakes much like the Hamburglar steals childhood memories.

"The Evil Grimace Ronald knows is round and purple and has big toes. He carries shakes in every hand as he scurries through McDonaldland." 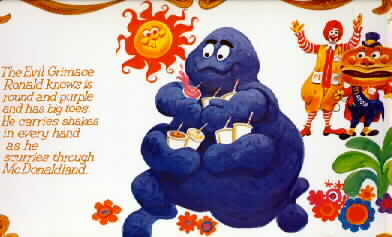 Who exactly uploaded this image from the place mat in the first place?

The crime spree and reign of terror is short-lived as he is captured within the year.

One flew over the chicken nugget

Legal wrangling higher up catches Grimace in the crosshairs of collateral damage. On the back room heels of the 1971 debut, two of his forearms are amputated and his purpleness sent to a re-education camp.

The Evolution of the Grimace: Criminal Mastermind or Loveable Fool? explains further:

similarities were pointed out between "The evil Grimace" and the Puf'n'stuf villain Seymore the Spider. Thus it can only be assumed that in an attempt to save Grimace from being a victim of the lawsuit, McDonald's amputated two of his arms and made him into a good guy, thus creating a brand new character that would not be accused of being plagiarized.

In 1974, a bumbling, lobotomised version stumbles back into the daylight to rejoin the McDonaldland citizens. This is evidence slight of a being capable of rehabilitation (albeit surgically). So the Grimace is neither human nor a bulldog that gets too chompy with a newborn. As the arms remain a pair to this day, there can also be no plausible relation to a species like the Florida stone crab or a salamander. Filet-O-Fish he is not.

The Straight Dope gives us a cut from a public relations representative bearing information through clenched-teeth:

"Grimace personifies the child in everyone. He is Ronald [McDonald]'s special pal. Everyone loves Grimace because of his innocent loving nature. He occasionally causes trouble in McDonaldland because he is clumsy, but his friends overlook this because he is so happy."

Either child-like or the id. The operation may have affected his ability to interact with the world. Or the whitewashing of his brain and memories brought him back to a place before the ill influences of society and milkshakes run amok on the moral core. 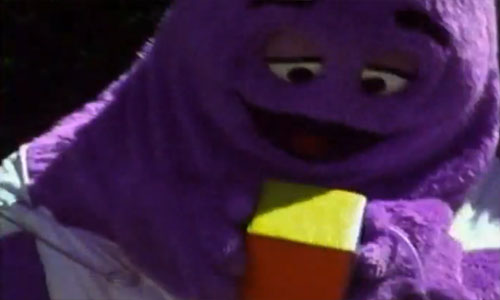 Still of Grimace's family home video from the 1999 Klasky-Csupo production, "The Wacky Adventures of Ronald McDonald: The Legend of Grimace Island."

Quote of a lost quote of the official line states:

Grimace is a big, loving, fuzzy purple fellow who is Ronald McDonald's best friend. He's sure Ronald is the world's ultimate authority on everything. While Grimace loves all McDonald's foods, he's absolutely crazy about milkshakes. Grimace is very enthusiastic and eager to try new things. His joyous spirit helps everyone overlook the fact he's a little slow and clumsy sometimes.

The Grimace enjoys milkshakes to a fervent degree. This is a condition pre and post lobotomy. Even his Uncle O'Grimacey, a leprechaun character covered in green fur and a year-round recluse save for March, indulges intensely on these partially gelatinated non-dairy gum-based beverages. Though, if recent recipes are to be taken, corporate is also launching a covert campaign to rub out his uncle via a backlash of unpopular taste opinion.

Taking an astute observation from the crowd, "Nothing can kill the Grimace," and we can add nigh-invulnerability to his class features.

If we pull back from the counter and place our hands by our sides as we order by number, we see that the inhabitants of McDonaldland are representative of something directly tied with the menu.

Mayor McCheese is a cheeseburger (the criminal element best up their cheese quotient in order to become upstanding members of the community). The Fry Guys are clumps of French fries and Officer Big Mac is obviously a Quarter Pounder. Ronald McDonald is, naturally, a Patch Adams synthetic. Of this motley band of mutants it's evident that all creatures in the realm are tied very closely to their totems.

Being non-human, Grimace must be totemic to something off the menu.

Following the totem theorem, we know that while Grimace may jones for the milkshakes, he cannot be one. No citizen or life form of McDonaldland is a cannibal.

The Hamburglar does not eat hamburgers, but instead liberates his primordial brethren from the clutches of mouth-breathers as he scurries away, quipping his "robble robble" catchphrase. (In some cases he snaps and takes bites out of them not unlike Sasuke does to Karin in the "Invasion of Pain" arc of Naruto Shippuden. We can attribute this to both a vampiric nature and the fact that he is hardened crim yet to be brainjacked.) The McNugget Buddies are chicken nuggets. (We don't need to know what chicken mcnuggets really are, that's a different fact sheet.)

As plain as the taste of the menu, the characters are not what they eat.

We are left staring into a box. The box.

From a morning of fibre laden research, we're left with these assertions: 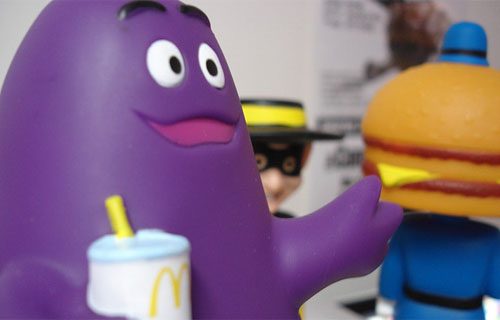 The shakes. They never leave the hands of Grimace. Possibly from nerve damage.

Grimace is a Happy Meal

It is the year 1977. McDonald's St. Louis regional advertising manager, Dick Brams, is hit by lightning to the creation centre of his brain. The idea: Make a meal for kids so the parents stop feeding them scraps like a pet dog. They test Fun To Go against Happy Meal. The latter wins. A prototype is conceptualised by Robert Bernstein of the Bernstein-Rein Advertising agency. The Happy Meal goes on sale in 1979. It goes on to celebrate decades of being one of the fast food chain's signature items.

In a 2010 panic, the city of San Francisco pull the trigger to ban its sale. The Happy Meal survives in the California city, even with some alterations. They cannot kill it. It has become a cultural icon.

The parallels are too stunning to ignore.

The purple behemoth is too large to be just one thing. He represents a collection of things. A Happy Meal is the sum of its parts.

Grimace is a happy meal.

It's the only thing that makes sense.

If you have one of the remaining VHS players still in working existence, you can watch The Wacky Adventures of Ronald McDonald: The Legend of Grimace Island if you poach it from Amazon.