“shaved her head/She was torn between Jupiter and Apollo,” sings Bob Dylan in Changing of the Guards. The line, when considered in the proper context of the song to which it belongs, of course, makes sense. But in another sense it is Dylan who is caught between Jupiter and Apollo, though perhaps Janus is more apt, given his penchant for showing two faces to the world.

Changing of the Guards first appeared as a single, then as the first track of 1978’s Street Legal. What isn’t so well known is that that line, “shaved her head/She...” first appeared in a play co-written with a haemorrhoidal Jim Morrison and aborted when he left for Paris and death. The play was an experiment in Artaud-ish Theatre of Cruelty, and the plot followed a Eulerian path from late 60’s Kent State comedown to hell – literal supernatural hell, that is. They squabbled over the line and it was removed from the play, but Dylan never forgot it, and he managed to get it down eight years after it was first written.

After July three, Dylan denied all knowledge of the play and the line's provenance: a fine example of Janusian thinking. This was to be wholly expected. There were hints of it in Dylan’s music: witness the crack in his voice 27-seconds into Highway 61 Revisited’s Ballad of a Thin Man; or when he loses it completely on the previous record’s Bob Dylan’s 115th Dream. The latter during which you hear not Bob Dylan but Robert Allen Zimmerman. There’s that second face.

The Changing of the Guards, which was the name of the play written by Dylan and Morrison, was obviously never staged, and, in a sense, neither could it – certainly not as Morrison had originally envisioned it. In what Morrison described as a post-Artaud construct, the plan was that if the play were ever staged it would be done so in a theatre with terribly uncomfortable chairs, leaving the audience frazzled mentally, but also with a weathered sciatic nerve.

By the time Dylan found Christ, or at least openly embraced Him, people were no longer asking about the lost play. Perhaps it was for the best. 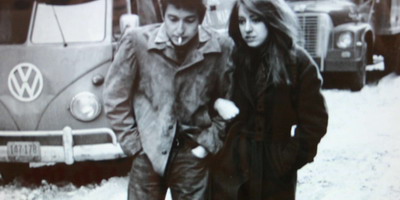