Compose a slithering skillet of the spinal fortitude as 12°C drops a load of ice palms outside before a minor rise to 15°C along and the across the escalators into the Lexington Convention Center. Empty tables in a ballroom lobby void of food and guts lays waste to those sitting, faces beat and done, this is only the afternoon and we have barely the undead braining it. 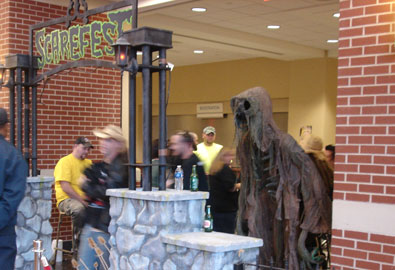 Event program rubs off the print on fingertips, the dry soak leaving the digits even drier than the freezing climate outside. Black and white and head shots all over, grey backing for black copy means it's not for the visually poor. In case you didn't know who these monster movie, horror film and slasher stars are or can't tell their faces without the makeup and prosthetics. Most of the former, by extension into the latter.

Schedules for the seminars and session panels are all done and gone before the tickets and wristbands. Behooves those heading out to already scribble the scrabble on scratch paper. The dimmer the light of last night, the greater the difficulty in reading back today.

Greenscreen and the ScareFest logo backdrops present the first fire hazard blockages, the milling feet of those jostling side to side building up the atmosphere of bumping sickles and gashing against bloody makeup and broken bones.

Into the wild and open, very open, space, the stride eases up to take quick laps and laps again. Vendors on the perimeter, vendors down the lanes, vendors everywhere and not one selling any organs, placentas or cadavers. That convention doesn't advertise, and instead we have zombie hawks, T-shirts and custom jewellery. 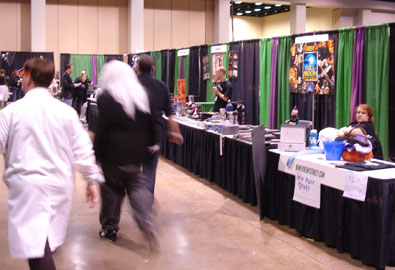 Horror takes the bulk of merch, the paranormal aspect of the con throws in beads and bracelets. No incense thankfully, but then the entire place is non-smoking by default per the city's mandate.

The George Romero Q&A panel introduces Tom Atkins, Adrienne Barbeau, John Amplas and Scott Reiniger before the grandfather of the zombie himself walks across the stage and fronts the centre. Big and hollow, the sound drops partway as the guests talk, a centre field of dead space hit the front and back sections of the audience. Even with the speakers, the void consumes its share. 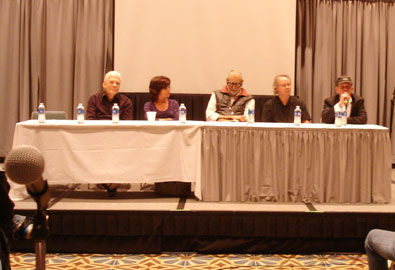 Straight into the thick, questions from the crowd gives chance for Romero to reiterate that real zombies hail from Africa with witch doctors and voodoo practitioners. Among the topics: CGI versus prosthetics; hoping for a zombie mind cure or having your brains blown out and the future of film. One chap gets shot down, his question on a nest of rumours torn asunder from a voice at the back, a typo nailing the stake in that lob.

The microphone keeps the rambling gushing to a low flubber, questions actually taking the time instead of the long-winding appreciation for and about and all that too personal connective tissue. Responses from the cast run the session smoothly, timing on a pipe with the questions never leaving the floor empty.

Ghostbusters running around with their proton packs don't clamber, alleys and aisles sporting enough girth to accommodate their lumbering frames. Alley corner block with Chip Coffey has the man sitting arms crossed as people stare at him from a metre away as Brandy Green and Robb Demarest from Ghost Hunters International sit at what are empty tables, though only until the next person comes up to them between long ticks. 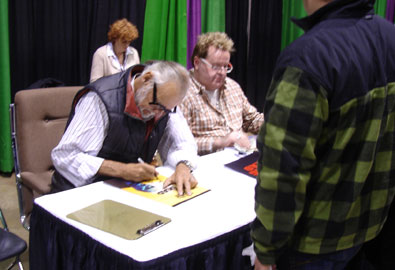 Off-panel line extends to where the chill is brrrr

Signing tables for Danny Trejo and George Romero lie at far ends of the back of the hall. Throngs of ghouls, fans and zombies tease out the flock, swarming the corners of the convention centre. They're the food and drink of the party, mingle inbetween. A spattering for the likes of Tom Atkins, Amelia Kinkade and George "The Animal" Steele line up the distance.

Why are there so many wrestlers? 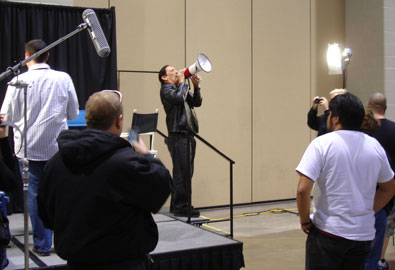 Save for these corners, the booths and tables for the other guests are wide and free, sizing up for photos only takes a few seconds pause. Catherine Hickland keeps up some magic as her table is right next to a full-size Predator prop under an interrogation lamp. The Impossible Magic table is begging for someone to stop by as the magician is losing all his coins.

Costumes and makeup from the ticket holders are gory and bloody, horror again weighing heavy on topic, the paranormal not as much. Clicking and a turn of a ghost from behind sees my wife freaking out, the girl one of the staff from ScreamPark walking over to their booth where a pigman and a boy with a respiratory condition are signing some posters. 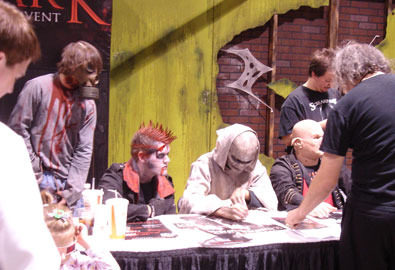 Crew and cast from ScreamPark

Somewhere a bloody scream curdles the air. Part of a contest on whose scream reigns supreme. Can't find the stage nor platform. Just a disembodied shriek.

ScareFest, "The Largest Horror & Paranormal Convention In The USA," feels rather quiet and calm on a Saturday.

Pick up the black & white, uncut, unrated, digitally remastered original edition of Romero's Night of the Living Dead from Amazon.