On a field of many, it's a team of one. Over 30 puppies in the rotating line-ups on the grounds of Animal Planet Stadium. Each dog to their own scoreboard and mowing the play down as they see fit, if they grab the toys. Counterprogramming against the human league in Super Bowl XLVI - Battle of the spreadsheets and text editors.

Soon as the puppies roll out from the tunnel it's a right mess. There's no teamwork, no coordination, no play by any books other than all out carnage. They patter out with their bios and likes, onto the field of play and the scrimmage is a festival of lone gunning. Running that rope or ball down the end zone before another dog notices your track.

The entire squad comes from animal rescue shelters, their player cards harking to the Petfinder service. See the little canine on show and look them up for drafting into their forever homes. And before you know it there's five touchdowns already. Most of which belong to Fumbles, a Chihuahua/Terrier mix, who "has every Bow Wow song on his iPawd". That little dog getting the most opposition from a Jack Russell/Pug mix by the name of Baskin.

Shiloh, a Dachshund, enters for a lightning double tap of touchdowns in the middle of the second quarter. Fumbles scoring one right at the tip into the half before taking what looks like an on-field nap.

The product placement is plenty and fruitful. The referee, Dan Schachner, doesn't address the home audience directly. When he does, it's to tell them "I can really taste the frost" in the ice breaker lollies in his hands and plastered over the hamster blimp as they view the action from on high. There's the vacuum cleaner from Bissel with planted clumps of hair on the carpet used to show its use. They weren't there before and the amount of shedding suggests a few of the dogs need to clam down some. 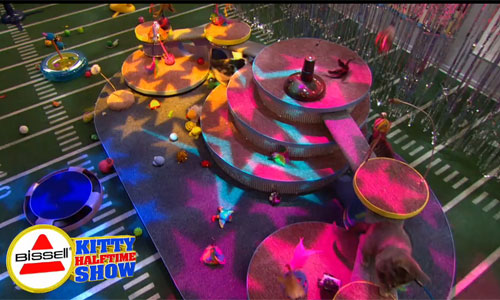 The Kitten Halftime Show is a scene of debauchery, of lounging around in a disco fare. Mirrors, ticker tape and a fast tempo to the swinging birds and jumping plush mice skitting about.

Third quarter and the size of the dogs look bulkier, bigger than the rookies from the first two sections. The pace is already underway with a double touchdown, two puppies, Augusta (Lab/Plott mix) and Pepper (Pit Bull/Collie mix), simultaneously dragging their toys over the line and sending the sideline commentary into a spin: 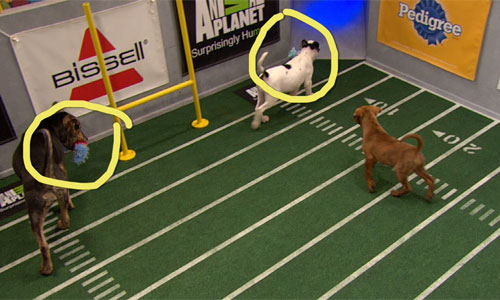 Eyes on Augusta with another sly move in corner

It's a rain dance in the third quarter as an Australian Shepherd mix, Aberdeen, follows soon after with yet another. Ranking up there against Fumbles for the most touchdowns in the game is Ronnie, quick on the board and quicker on the follow-up.

Aberdeen makes an aggressive play, blitzing down the middle and slamming a toy, barking off a Boxer named Hunter, before carrying it over the line again. One to watch on the tally. But soon in his own world, hogging the balls and leaving them in the middle, no use in scoring a dead drop.

Hunter and Hollie (Border Collie mix) wrap up the third with a tussle and brazen pounce beat up, gnarling at each other before the whistle blows it out into the closing quarter.

Scott Graham narrates the play-by-play with a sound line not unlike video game scripts of the 90s. The tin and reverb echoing familiar rotes, keeping the words new and fresh, but typical of what you'd expect humans to listen to when they watch. A true sports commentator's voice, puns included.

A foul starts the last, Montana, a Collie/Rottweiler taking a dump just shy of an official touchdown, giving the ref time to scoop it up and issue a penalty. Jazz player and Catahoula mix, Sweetie Pie, comes up with the most flamboyant touchdown celebration, weaving in and around the field goals on a successful run.

Where the third was about the scores, the final is about the play and blind strategy in motion.

Abileen, sporting David Bowie eyes, gets into a tense shuffle against her brother Aberdeen and another pup, Anthony. Up and down the length a few times before the terse shake off and in for another six on the board. But, for ramming head long into another puppy shortly after, is out for the rest, unruly conduct.

Brandy, a Pit Bull/Collie mix and fan of Canine O'Brien, takes a stream through the pass between a block and scores one between the mix. Pepper, same breed as Brandy, rushes a block between Aberdeen and Anthony, knocks out the fumble, picks up the toy and brushes past all of them for his own.

And time. Scores are done and the water bowl only sees one player fall into it during the course. Puppy Bowl VIII MVP goes to Fumbles, a star scorer and only nipped at the heels by a single try.