Scavenging meagre food scraps from the midnight meal crossing the Pacific Ocean to entertain the gut for the hours long layover fails to sustain the dancing attention-seeking portions of your brain. The Culture Beast needs a chomp. One fix is at the far end of the International Terminal of SFO.

Body clock is out of whack, circadian rhythms beating up a fine noise on what's about to happen when the time is right. The left knee is going to disappear at any second just on the simple act of sitting down. Time to walk a slow ambience along squeaky glass cabinets showcasing aeronautical artifacts.

The Louis A. Turpen Aviation Museum models itself on the passenger waiting room of the 1937 San Francisco Airport Administration Building. Cold empty space with a bright gleaming array of any angle reflective glass. 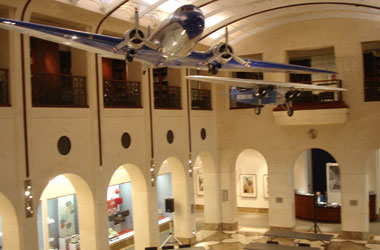 
Main floor space of the museum removes itself from cross-section roaming. Tables and chairs for a seminar or class that is out for lunch wastes the middle ground. Tour along the walls here unless you're one of those chaps who forces everybody else in the plane to wait for you to stuff your oversized carry-on into the communal overhead compartments. Or at least it's supposed to be communal and not first-come, clatch-the-latch.

Tail end of May 2010 and the current exhibition is either Japan Airlines: Dawn of the New Age or Japan Airlines: Over Fifty-Five Years of Service. Whatever it is, it's a wardrobe and inflight meal display of the fine wears and utensils boarding planes with the JAL identifier. 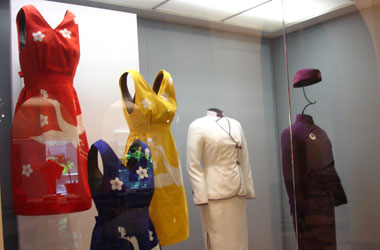 A single pilot's uniform among plenty of steward uniforms, bento boxes, poster ads, passenger bags, it's all a Japan Airlines retrospective. In an appendix there are some more photos about the passengers and staff of the time smiling and putting on paper kimonos. 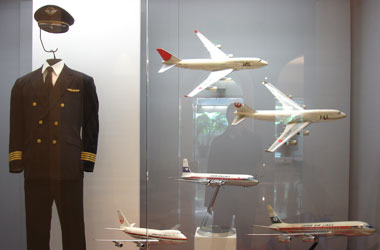 Age wears on the front desk, the two elderly gents happy enough to leave you alone to wander about the short perimeter of the museum. Throw in a question and the chances of it bouncing off the other and then another bloke in the back room are high.

The museum voids itself neatly to allow all of the display items to take the stage, replete with too low information cards about the said items. Only a few stalwarts of the hangar linger about, providing a backdrop of continuity for the otherwise turntable of feature objects. 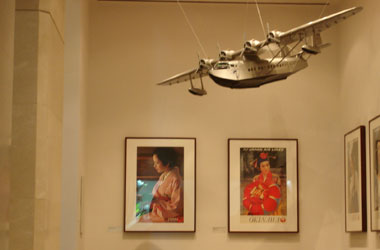 Placards are just below knee high, middle of the shin territory. Unless reading through glass at high angles is a skill, it's a bit of squat-and-shimmy for consuming the information present. 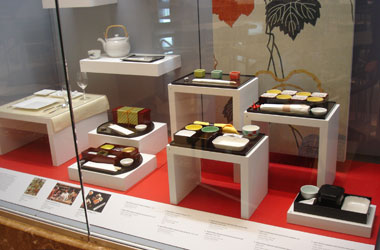 When reading the notes, be careful to not bang the glass with your greasy forehead

Condition of items is impressive in their crispness. Deterioration and fraying, as well as succumbing to the paws of time not apparent. Colours as bright as the day of manufacture. Evolution of the various articles is an interesting diversion and curious look at material change and societal influences.

No discernable story or narrative links one cabinet to the next. All the transition of history lies inside each self-contained box. One part of the larger whole, but speaking nothing more than the overarching embrace. Thematically shallow, it's more a staid gallery than an implicit lesson through context and anti-juxtaposition.

From the lower floor, the view of the upper deck appears not to have any room for a cart hanging off the rims with luggage. Or even a single suitcase on wheels. The thought of leaving them at the base of the stairs to check out the library is not worth testing the hyper-paranoia of unattended baggage in a public space.

Reading is where the time comes in and is a good way to pass at least an hour before the next part of the layover continues to hold you back from passing through the security checkpoints.

Found at Level 3 of the International Terminal, near the entrance of Boarding Area A. No plane tickets needed, it's on the outskirts of the airport terminal, free to roam and soak without a pat down or x-ray screening.