Thwip! zine by Ivan A. Martin

Spider-Man either wears boxer-briefs or a comfortably snug and supportive thong. Nothing like the loincloth of a few years back with cogs and an elaborate pulley system. If keeping his genitals from contacting the costume directly isn't an issue, it's full on commando. Possibly making such a concession when tailoring the suit. Anything less secure and his genitals would be getting in the way of his patrols.

Thwip!, a zine of over one hundred and some issues by Ivan A. Martin and various contributors, contains no writings of this nature in the sample selection. Reviews, interviews, self-reflection, that's what appears in this publication about all things Spider-Man.

Conveniently set at a mere two American pig dollars for each regular issue, the long gone recent landmark #100 scores five beans in the side pouch. After emailing Martin, aka Spidey-Ivan, a six dollar US sum settles the talk. Covering postage for the tonner and a bonus copy of #99 for good measure.

Handing over the equivalent in Australian dirt cash for the issues proves to be costly.

Sending cash through the post, that's considered a no-no. Big frown from Australia Post. And with no receipt without registered post, it's a fair and sound warning. Not that that ever stopped the OMO Clean Club from sending a single two dollar coin strapped to a bleached card to make good on a cash-back rebate.

Paypal is out. Not everyone has an account or likes playing with their fees.

Money orders are not exactly transcontinental. What cashes out here might not cash out in another country. Figuring out what the future exchange rate will be when cashing it out on the other end is also another factor and a strike against buying one.

Wire transfers, well, there's that. Not through a bank though. And the only other thing that comes to mind is Western Union. Post offices, American Express joints, newsagencies, little other shops all over the place. Western Union all over the space. And yet, holding no place of its own.

Corner of George and Hunter Streets in Sydney, there's a little place shilling for American Express. Outside, in a sign unmistakable, an agent for Western Union. Why of all places this? Who knows. Being the closest in walking distance from the building helps. Martin Place post office, another agent for Western Union, is two city blocks up the road.

Scribbling up the wide docket of records takes a bit of time. With nobody else in the small outfit, there is a wait lining up to the cashier's window. A girl by the name of Trainee stalks the window. Hovering over her shoulder, an older woman, beading down on each keystroke.

Roughly stabbing, the Australian to US dollars exchange rate for six is probably no more than ten. Add a small fee and that ends the costs. Nothing too bad or shocking to look at.

Quite quickly, with half of the transaction already underway and wheels squeaking pitches of death for the walk back, cash flies out of the envelope, onto the counter and the deal is done.

With sunshine in the eyes, and heat from the three hour lunch running close to over time, six dollars on Martin's end starts out as $27 on this side of the Pacific. Fees inclusive no less. Certainly no less from American Express and Western Union, uniting in collection. 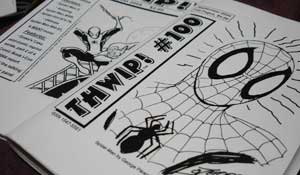 Enthusiasm and love for Spidey is well apparent when reading. Reprints of earlier issues litter alongside reviews of comics new and old concerning Spider-Man with a few fragments of pop culture in the mix. Talking against walls and replies to other zinesters in the Marvel Zombie Society loses some kind of mindful information.

Filler bloats out the page count way too much, sinking any tightness of the zine.

Slightly interesting enough of a distraction for a long train ride.